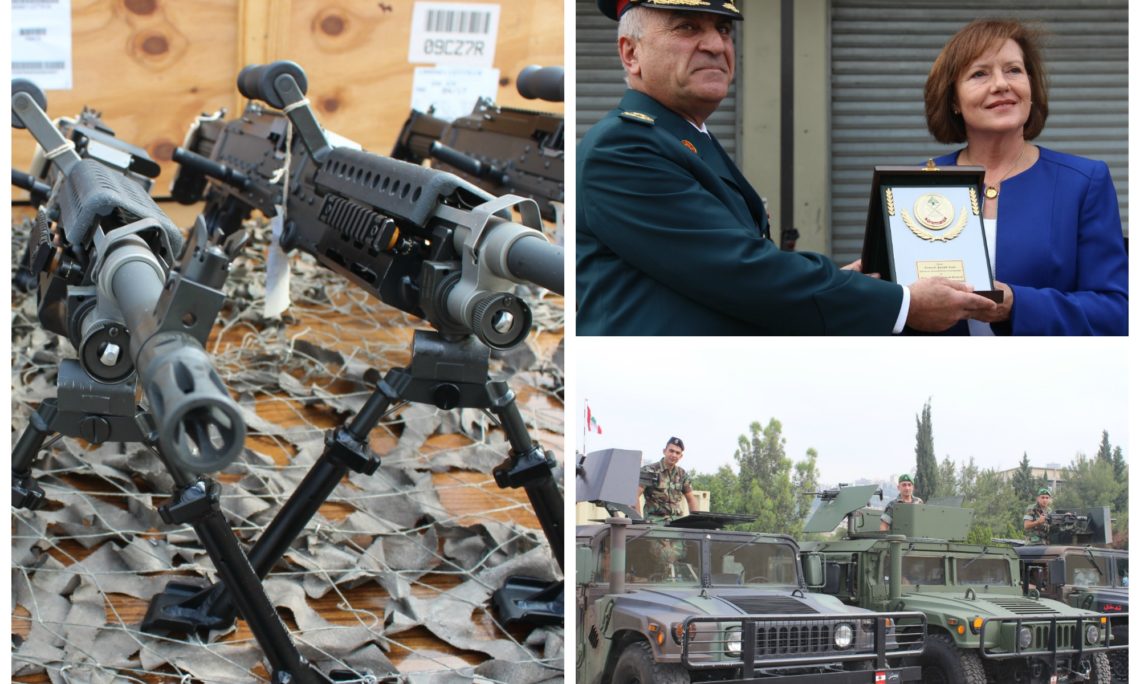 On behalf of the United States, Ambassador Elizabeth Richard today presented over 1000 machine guns to the Lebanese Armed Forces as part of the LAF’s ongoing efforts to improve border security.  The equipment includes 800 heavy machine guns and another 320 crew-served weapons, adding to battle-tested equipment already in the hands of the LAF.  The machine guns will be used to increase firepower along Lebanon’s borders and will allow Land Border Regiments in the LAF to occupy and defend their border positions on schedule.

In a ceremony at the Logistics Brigade Headquarters at Kfarshima, attended by LAF Brigadier General Farah and Brigadier General Abi Nasif, Ambassador Richard highlighted the important role the LAF plays in addressing the serious challenges Lebanon faces, many of which arise from the conflict in Syria.  She noted that the handover of this new shipment of weapons is another example of the ongoing U.S. government program to improve the LAF’s capabilities to carry out its mission as the sole defender of Lebanon.  Ambassador Richard said, “Today, I am happy to be with you to receive the latest delivery of equipment – equipment which we are confident will be directly employed to protect and defend Lebanon’s borders, and by the very nature of that act, Lebanon’s most valuable asset, its people.”

Following are Ambassador Richard’s full remarks at the ceremony:

“Good Morning, every one, and thank you for the opportunity, once again, to demonstrate our commitment to supporting the Lebanese Armed Forces.  Brigadier General Farah, Brigadier General Abi Nasif, it is my pleasure to be with you here today to participate in this delivery of important equipment, a critical symbol of our support to the Lebanese Army and the protection of Lebanon’s borders.

In the past, delivery ceremonies have focused on more sophisticated and technologically advanced military hardware.  In August, in one of my first interactions with the LAF, we marked the delivery of 50 Armored HUMVEES with automatic grenade launchers, 40 howitzer artillery pieces, and advanced HELLFIRE Missiles along with many other types of munitions.  In December, we again gathered to celebrate the delivery of the LAF’s latest armed Cessna aircraft.

The Lebanese Army has quickly utilized this increase in combat power to aggressively target terrorist threats, protect the nation’s borders, and demonstrate its resolve to defend the Lebanese way of life, and we have seen how border communities’ trust in the LAF is impressively high and is growing.

Today, I am happy to be with you to receive the latest delivery of equipment – equipment which we are confident will be directly employed to protect and defend Lebanon’s borders, and by the very nature of that act, Lebanon’s most valuable asset, its people.  The weapons which you see displayed here today represent a much larger shipment of 800 .50 Caliber Machine Guns, 171 M240B Machine Guns and 148 M249 Machine Guns, valued at over fourteen million dollars.

The equipment we see here today does not represent a new capability for the Lebanese Army.  Rather, it will strengthen your ongoing efforts to increase your border protection.  Recipients will include the Border Regiments that are now being stood up as part of the joint US-Lebanon-UK program to secure the whole of the Lebanese – Syrian border for the Lebanese state by early next year.

These weapons displayed before you, much like the Lebanese soldiers, are proven, reliable, trustworthy, and deadly to those who would impinge on Lebanon’s sovereignty and freedom.

We recognize that the challenges facing Lebanon are serious.  Many of them emanate from outside your borders.  But the Lebanese are strong, as you have proven over and over through history.  Rest assured that the United States stands beside the Lebanese Government and the Lebanese Army as we work together for a more peaceful future for all of us.

Thank you again everyone for being with us today.