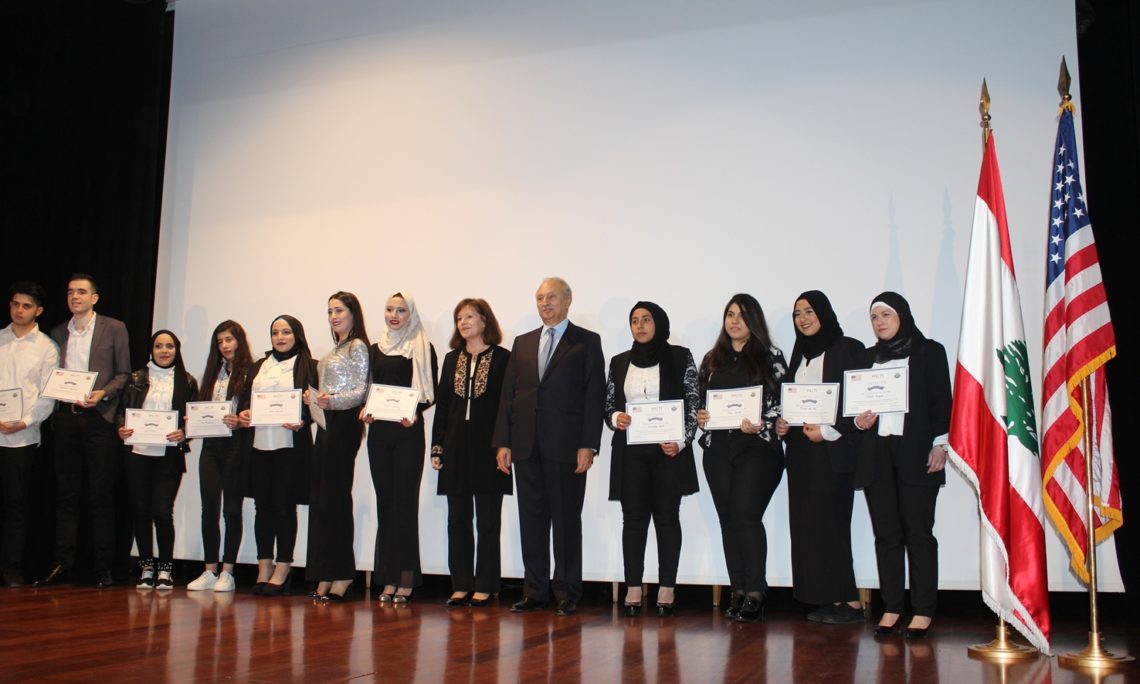 As part of the $825 million in assistance the United States provided to Lebanon in 2018, we are funding projects in northern Lebanon to provide youth with the education, tools, and skills to succeed in the marketplace.  Today, we commemorated  two projects:  “Lebanon Youth SEEK Jobs” which has already helped dozens of young people find jobs, and a new project “Tripoli Youth Economic Engagement,” also designed to assist young people in northern Lebanon by offering them vocational training in fields with  high demands for skilled labor.

U.S. Ambassador Elizabeth Richard reiterated in her speech today that “The United States is committed to helping support the Lebanese people.”  Our support, which amounts to over $5 billion in total assistance since 2005, demonstrates the United States’ long-term commitment.  The projects celebrated today demonstrate our focus on empowering the next generation in northern Lebanon.

Good morning everyone.  It is great to be back in Tripoli.  I am really delighted to be back here, especially with my old friends: Mr. Minister, my dear friends and religious leaders of Tripoli, Mr. Mayor and other leaders, here in the Tripoli area and the North.

I am very happy to be here because this is a very special project to us.  U.S. investment in Tripoli is not something new.  We have been doing this for a long time and we have a long relationship with Tripoli.  In fact they tell me there is even a neighborhood here called the neighborhood of the Americans – Hay al-Amercan, which I must go visit.

We are here today to celebrate two of the latest U.S. Embassy projects in Tripoli, one that is ending called “Lebanon Youth SEEK Jobs” and one that is beginning “Tripoli Youth Econ-Engagement.”  Both projects help Lebanese youth develop the tools and skills they are going to need to enter the Lebanese job market.

We are supporting these programs because we believe that education has to be accessible to everyone, especially to the citizens of the North.  This region is vital to the Lebanese economy and has been neglected by the central government for too many years.

You know, we invest over $50 million every year in education in Lebanon – from reading programs for primary students all the way through sending talented Lebanese to the United States for graduate degrees through our Fulbright program.  Along the way, we send high school students to the U.S. to study English.  We do social entrepreneurship programs including right here in Tripoli.  We fund full scholarships for smart young people who would otherwise not have the means to go to university and we support vocational training, like the great programs we are here today to highlight.  In the U.S., I would like to mention, vocational training and the jobs that they create, support a large number of our citizens and their families, including members of my own family.  So, we are proud to be partners with Safadi Foundation’s vocational school.  And I’m very happy to report that graduates of this school are even now being hired to work on our billion dollar new U.S. Embassy project in Lebanon.

Let me say a word about a couple of other U.S. programs that benefit Tripoli and the North.  Right here in Tripoli, we have started a program called “Hope.”  The U.S. government pays all expenses for 100 students from Tripoli to attend the Lebanese University here in town.  As part of the scholarship, we also provide English language instruction, leadership training, and career planning workshops.

More broadly, we invest about $12 million each year in our University Scholarship Program.  Each year we offer 100 talented Lebanese high school graduates comprehensive four-year scholarships to LAU and AUB.  And I’d like to point out that nearly 250 very bright talented people from Tripoli and the North have already won these scholarships and graduated from these two great Lebanese Universities.

The enduring partnership we have forged with the Lebanese people through the education programs fits into a much larger effort by the United States here in Lebanon.  I’d like to give you one more number, if I may.  In 2018 alone, the United States provided $825 million dollars in assistance to Lebanon.  That includes: $168 million in to development programs that finance businesses, particularly in agriculture, access to clean water, and measures to improve governance, including here in Tripoli. $362 million in humanitarian assistance, including to Lebanese communities who are hosting, very generously, such large numbers of refugees.  For example, we recently refurbished over 2,000 residences across Tripoli – from Jabal Mohsen to the old city.  And we provided over $180 million in assistance to the LAF, just this year, including support for the Border regiments which are located not very far from here.  They are for the first time in many decades putting Lebanese soldiers on your border to protect you from Da’esh and other threats coming from outside the country.

But assistance is only a tool that helps Lebanon in the short term.  The real solution to the economic problems here is investment and economic growth.  We are trying very hard to bring more U.S. companies to invest in Lebanon.  U.S. firms are committed to clear and transparent business practices.  When you see a U.S. firm, you can be sure that it is abiding by U.S. laws, including laws that prohibit U.S. companies all around the world from paying bribes to win contracts.  They pay fair wages and ensure fair working conditions.  And when they invest outside the U.S., they are always investing for the long term.

The energy sector is a great example of where U.S. technologies and investments can make a big impact on the Lebanese economy.  Today, American companies are bidding on projects to transition Lebanon’s power production from dirty diesel and heavy fuel oil to cleaner, cheaper natural gas.  These projects are going to establish natural gas terminals at Deir Ammar, Selaata, and Zahrani.

I very much hope that the new government moves quickly on the badly needed reforms and investment that would bring reliable and affordable energy to all Lebanese.

In closing, from talking to countless Lebanese from North to South and East to West in this country, I hear that the Lebanese want more from their government. They want action from their government.  There is a new government now and the United States is absolutely committed to helping support this government, helping support the Lebanese people, and helping build this economy, and the state institutions for the long term.  We have been here a long time – at least since the founding of AUB and IC in the mid-1800’s.  And we are going to be here for a long time in the future, very committed to be with you as you build a future for Lebanon, so thank you very much.  Mr. Minister thank you very much for everything Safadi Foundation is doing and thanks all for being with us today.