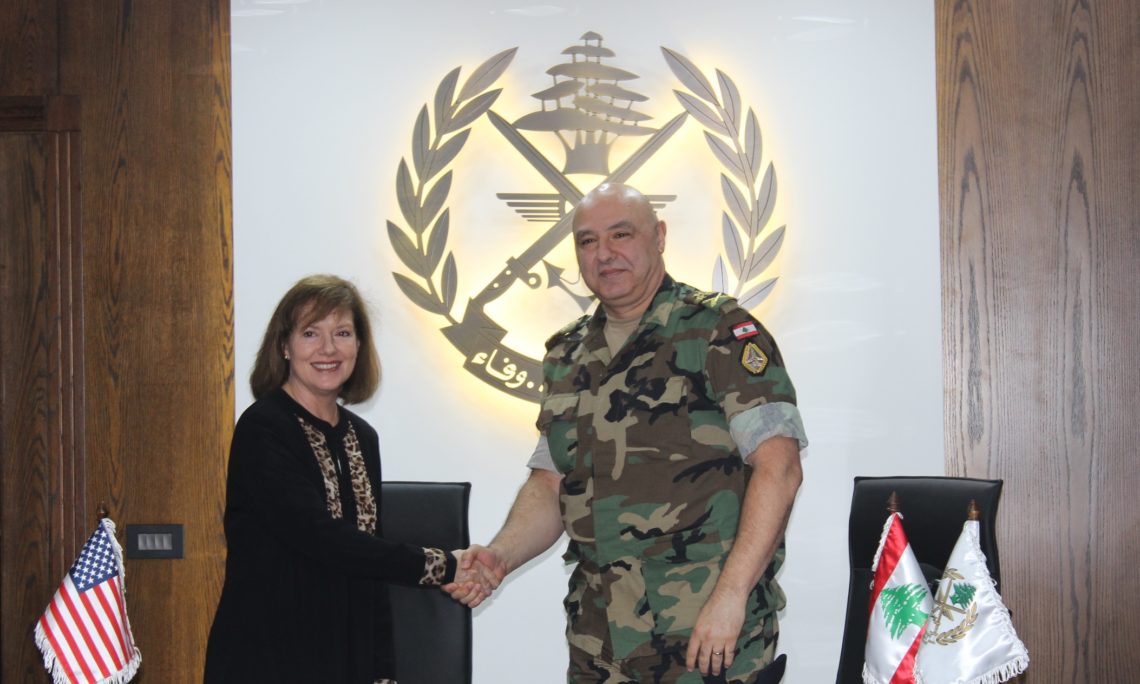 The following are her remarks at the meeting:

“Thank you General Aoun and thank you everybody for being with us; and a special thanks to Ms. Heidi Grant for coming to Lebanon.  She is the Deputy Undersecretary of the Air Force for International Affairs, and she comes to Lebanon following the arrival, just two weeks ago, of the Super Tucano A-29 attack aircrafts, to further advance the LAF’s development of the Air Force; and so we are just delighted to have her here to continue this path that we and the Lebanese Armed Forces are on together to develop the capabilities of the force.

I also wanted to take a minute today to take the opportunity to also announce the recent delivery of a significant amount of funding that was just transferred from the Department of Defense to the Government of Lebanon, through the Ministry of Finance.  This funding, in the amount of $42.9 million, is part of a Border Operations Reimbursement Program, through which the Government of Lebanon can request reimbursement for some of the LAF’s costs in securing the Lebanese borders, particularly in the LAF’s fight against ISIS and other extremist groups.

As we have seen, the LAF has done an excellent job stopping the advance of these groups into Lebanon’s northeast border and the Army continues to prevent their spread into and throughout the country.  So this reimbursement to the Government of Lebanon was based on invoices that were prepared by the Lebanese Ministry of Finance on behalf of the Ministry of Defense and the Army for this year.

The U.S. Government and the U.S. Embassy are looking forward to coordinating with the Government of Lebanon and with the Army regarding the use of these reimbursed funds.

I want to say here that the United States remains committed to a stable, secure, democratic, and prosperous Lebanon.  We are very proud of all our efforts across the country to help the people of Lebanon, through education, through micro-finance for startups for support to small and medium businesses, and programs that help improve the agricultural sector, electricity, our solar energy projects, and water; and there is so much more.  We are very proud of all of that we are doing to help the Lebanese people, and I want to say today that we are particularly proud of our partnership with the Lebanese Army.  So thank you very, very much General Aoun and all the team for what you are doing.  I am very, very happy to be here and very happy to have Ms. Grant here.”