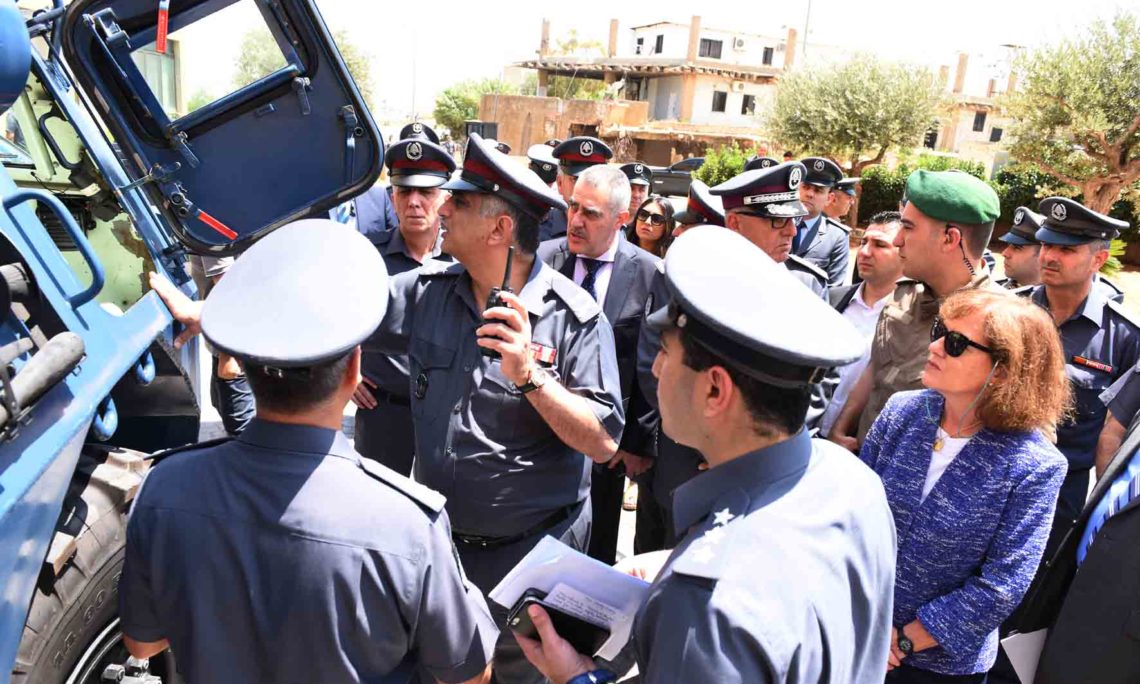 U.S. Ambassador Richard participated on July 6 in the official handover ceremony for a new $9 million secure digital radio system for the Lebanese Internal Security Forces (ISF). This system includes over 2,700 handheld and vehicle mounted radios, as well as a secure system of base stations and communications relays to provide widespread network coverage.

During her remarks, Ambassador Richard said, “This new $9 million system will greatly improve the ability of the ISF to securely communicate across the population centers in Beirut and Mount Lebanon. It will help the ISF more effectively respond to the security needs of Lebanese citizens and improve information flow between ISF units in the field and their commanders. We are proud of the strong and successful partnership we have with Lebanon and the ISF.”

Since 2006, the U.S. Government has provided more than $178 million in training and equipment to the ISF and over $5.4 billion in total assistance to Lebanon.

Following is Ambassador Richard’s speech at the event:

Director General Osman, General Farah, our Friends and our colleagues, it gives me great pleasure to be back here at the Aramoun Training Facility today. This is a wonderful facility that is used to train the security forces from across Lebanon. I am very proud the U.S. has helped develop this institute, and that we will continue to expand and professionalize this institute with additional classrooms and dormitories over the next few years. Seeing what you are doing reaffirms our confidence in the officers and staff assigned here.

Today we mark the latest development in our relationship with the ISF. We are transferring over a new secure, digital radio network, an investment of over $9 million, which has been in development for some time now.

The system includes over 2,700 handheld and vehicle mounted radio units, as well as a secure system of base stations and communications relays to provide widespread secure network coverage.

This is going to greatly improve the ability of the ISF to communicate securely across the population centers in Beirut and Mount Lebanon. It will help the ISF more effectively respond to the needs of Lebanese citizens and improve information flow between ISF units in the field and their commanders and headquarters.

We know the ISF works tirelessly very day to help keep Lebanon safe, and we are very proud to assist you in this effort. I would like to take a moment General Osman, if I may, to highlight and congratulate you and all the ISF on the significant drug seizures you have made recently. Just last month, the ISF seized 15 tons of hashish, a new record for the largest drug bust in Lebanese history. And then just a few weeks later, you seized nearly 1700 kilograms of hashish and 2.4 million Captagon pills in a single week. This is outstanding work and reflects a level of professionalism and dedication that I hope all the Lebanese citizens appreciate.

As I’ve noted before, since 2008 The State Department’s Bureau of International Narcotics and Law Enforcement Affairs (INL) has provided training for thousands of ISF officers and we have provided over $178 million in equipment and support to the ISF, which is one of our closest partners in this region. We are very proud of the strong and successful partnership that we have with Lebanon and with the ISF, and of what we have achieved together, and we very much look forward to working together in the future.