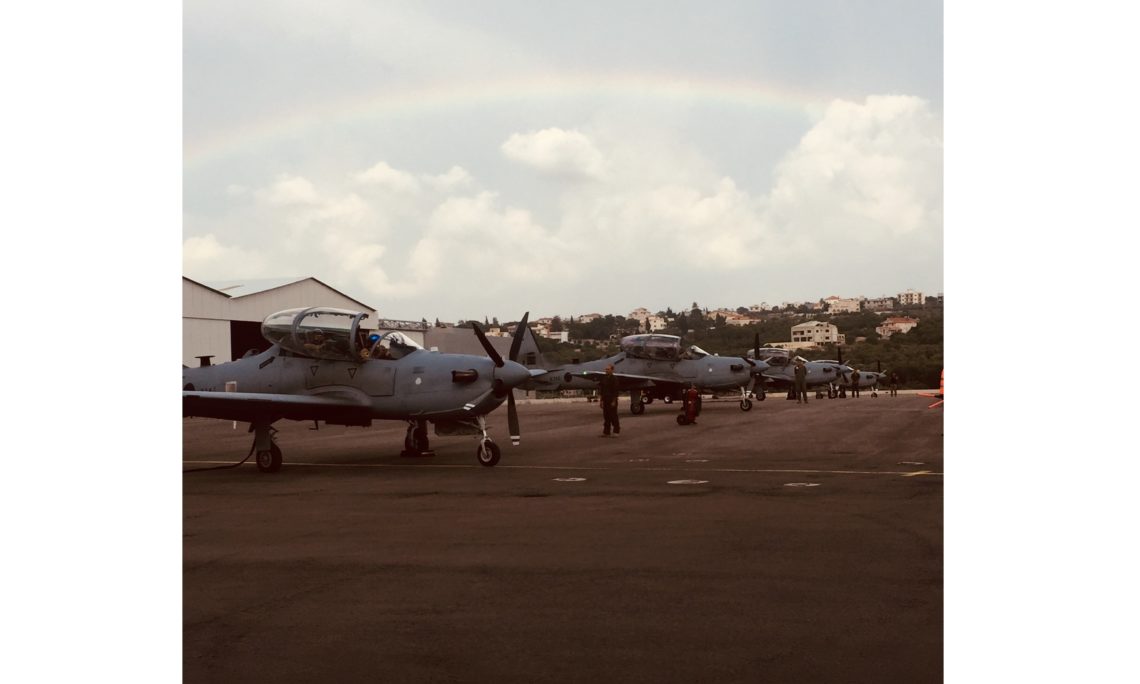 Ambassador Elizabeth Richard spoke on Tuesday June 12 at the Hamat Air Base on the occasion of the delivery of four A-29 Super Tucano aircrafts to the Lebanese Armed Forces.

Good afternoon.  General Aoun, Major General Shreim, General Haykal, our brothers and sisters in the LAF and the air force and dear guests.

It is just great to be back at Hamat Air Base to mark another milestone in the remarkable development of the Lebanese Armed Forces as one of the most capable militaries in this region.

Finally, all six A-29 Super Tucanos are in Lebanon!  Congratulations to the Lebanese Armed Forces, the Lebanese Air Force, and all those who worked on this program over the last several years to make it a success, and I include here the representatives with us today from the United States Air Force, who were with you through the entire process.

As you know the first two A-29 Super Tucanos were delivered last October; this set of four aircrafts that arrived recently completes the delivery.

But that doesn’t mean the program has ended—the US will continue to support the integration of the A29s into your capabilities over the coming years.

I am also pleased to honor the recently returned LAF pilots, among the best professionals in the region.  The LAF is recognized in the U.S. for the quality of the officers and soldiers it sends to our training and education programs.

Lebanese students routinely finish at the top of their classes, earning ‘honor graduate’ recognition.  The recently returned A-29 pilots and maintainers upheld this real high LAF standard, and our military is very proud to serve with them.

The acquisition of the A-29 Super Tucano, a new aviation platform featuring advanced technology, will transform an already-strong air power capability that has been a key part of the Lebanese Army’s ability to defend this country.

The A-29 provides the LAF with precision guided munitions and advanced precision strike capability.  This is a game-changing acquisition that takes the LAF to the next level of combat capability.

With the A-29, the LAF will now be able to conduct joint combined arms maneuvers in all conditions, day and night, in a way that greatly reduces the risk of collateral damage and the danger to civilians.

Before long, I would like to note, we will be complementing the power of the A-29 aircraft with six MD-530G light attack scout helicopters.  We announced these last December when General Votel visited Lebanon.  This is a significant Air Force that we are building together.

As demonstrated in the LAF’s “Dawn of the Hills” operation last August, the Lebanese people can trust the LAF to achieve national strategic objectives and defend the country.

I’d like to also say, today is also another reminder of the strong bond between the U.S. and Lebanon.  Over the last decade, the U.S. government has invested over $1.5 billion in training and equipment, and we have trained over 32,000 Lebanese troops.  We will continue this partnership and support to the Government of Lebanon and to the Army.

I would like to highlight one very important point here.  For all militaries, including our own, the process of planning for, acquiring, and sustaining the capabilities needed to accomplish the mission is a long-term strategic endeavor.

Let me take a moment to salute all the former Army and Air Force officers – and some of them with us today – who understood that a modern armed force is not built through one-time, short fuse equipment donations or purchases.

Real capability is built over time, through thoughtful analysis of the threats, and careful planning and design of the Lebanese Army of the future.  None of what you see here today, and frankly, none of the great successes of the Dawn of the Hills battle, would have been possible without the dedication and the foresight of all those officers and non-commissioned officers who came before us.

We are very, very proud General Aoun, General Haykal, General Shreim, to be your partners.  Thank everyone for being here with us today.