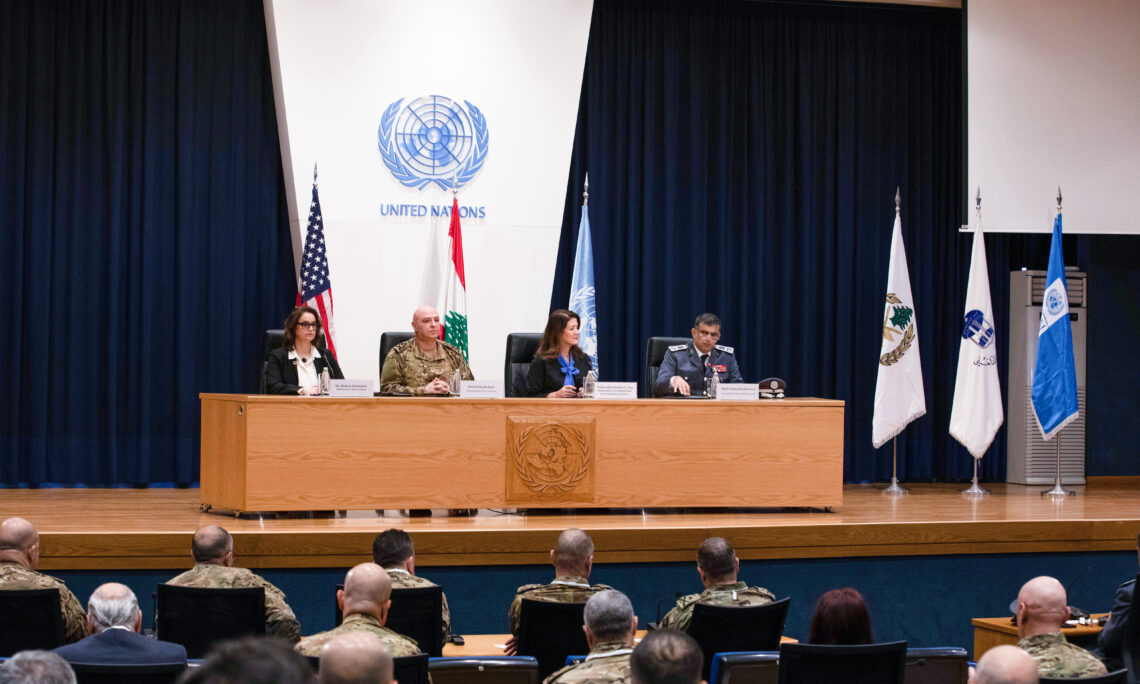 U.S. Embassy Beirut and the United Nations Development Programme (UNDP) announced the rollout of the “LAF-ISF Livelihood Support Program,” which will provide $72 million in temporary financial support for Lebanese Armed Forces (LAF) and Internal Security Forces (ISF) personnel.  These payments will provide every soldier and police officer eligible to receive assistance under U.S. law with $100 per month for a period of six months.  Under this new agreement, UNDP is working with a nationwide financial service provider to disburse these funds as soon as the modalities are finalized.  Ambassador Shea was joined at the event by UNDP Resident Representative Melanie Hauenstein, Lebanese Armed Forces Commander General Joseph Aoun, and Director General of the Internal Security Forces MG Imad Osman.

In her comments, Ambassador Shea underscored that “In light of the urgency of Lebanon’s dire economic situation, we asked for and received the consent of the U.S. Congress to re-purpose a significant portion of our security assistance to support hardworking men and women of the LAF and ISF who faithfully report to duty to protect their homeland, with critical funds to put food on the table for themselves and their families.  The payments we are announcing today will provide soldiers and servicemembers who are eligible to receive assistance under U.S. law with $100 per month for six months, for a total of $72 million.  Providing this temporary assistance – which is the first time the United States has ever provided such financial support to security forces in Lebanon – will bring relief to brave and hardworking soldiers and servicemembers, as we urge Lebanon’s political leaders to elect a president, form a government, and enact urgent economic reforms.”

Melanie Hauenstein, UNDP Resident Representative in Lebanon stressed that “security, stability, and the swift implementation of reform are the basic prerequisites for development in Lebanon”. She further stressed that “transparency and accountability are key for a project of this scale and importance. As the implementing agency, UNDP will work with trusted partners to ensure funds will reach those eligible, no matter where they are stationed. UNDP has also mobilized an internationally recognized third party agency to monitor the operation. And, we have put rigorous mechanisms in place to ensure that the project adheres to the highest human rights due diligence standards.”

LAF Commander General Joseph Aoun added that, “the fact that the international community is keen on preserving the military institutions proves that it will not allow Lebanon’s collapse on the security front. And this is done through its continuous support to the LAF and through its commitment to the UNIFIL in the south. Lebanon is vulnerable to a set of challenges and dangers, because of its geographical location, the multiple crises it has faced as well as the presence of the displaced Syrians and Palestinian refugees. Therefore, the impact and consequences of its collapse are not limited to it as a country but will have a spillover effect into regional security environment. We have promised our people that the armed forces, despite all the challenges it faces, will remain true to its oath to defend the Lebanese and the dignity of the nation, no matter how heavy and painful the sacrifices are.”

He added that “We hope that Lebanon will recover quickly, and that its people, especially the youth will regain their confidence in their country. We promise that the LAF will remain coherent and cohesive, against all rumors and accusations. The LAF and its members will continue to work in silence and sacrifice without limits. Our soldiers are strong, determined, and fully committed to the LAF and the Lebanese people.”

ISF Director General Imad Osman stressed that he is “I stand here today, carrying the burdens of the Internal Security Forces Institution, an institution that was created before the birth of the state of Greater Lebanon, and continued over the years to make sacrifices in order to ensure security, safety, freedom and comfort of all residents all over the Lebanese territories.  Our institution adopted the vision of “Together Towards a Safer Society”, and prioritized adherence to human rights.

The families of the ISF, similar to other Lebanese families are struggling from the bitter and difficult economic crisis affecting all of Lebanon, the ISF members now face two things:

On the one hand, they must secure the food, livelihood, medical care and education for their families, and on the other hand, they must remain faithful to their oath and to the institution that embraced them throughout their years of service.”

The initiation of this program marks a continuation of the United States’ commitment to supporting the critical efforts of both the LAF and ISF to ensure Lebanon’s stability and sovereignty.