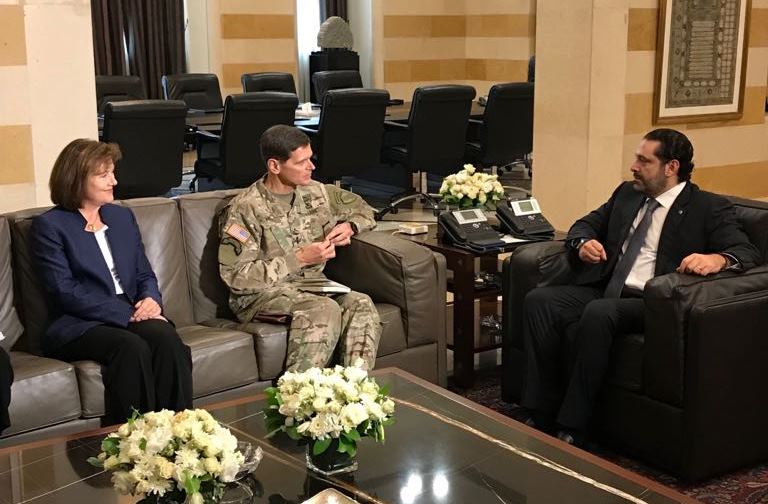 Ambassador Richard: “I am very pleased to have General Votel, the Commander of the U.S. Central Command, returning to Beirut, here with us today.

We have just come from meeting the Prime Minister, and we had an excellent conversation about the challenges facing Lebanon and the region.  We also talked about how the U.S. and the broader international community can support Lebanon in these challenging times.  Just last week, for example, the International Support Group for Lebanon met in Paris to recognize Prime Minister Hariri as a major partner in managing Lebanon’s unity and stability.

The ISG drew attention to the Lebanese Cabinet’s reaffirmation of a policy of disassociation from conflict and regional wars, and it recalled Lebanon’s previous commitments under UN Security Council Resolutions, including 1559 and 1701.

The ISG also supported Lebanon’s political leaders including the Prime Minister – representing all Lebanese – who have spoken with one voice to say that the prosperity of the Lebanese people and stability of this country depend on its ability to avoid entanglements in regional conflicts.

For our part as the United States, we are continuing our longstanding commitment to the Lebanese people and to Lebanon’s institutions, including the Lebanese Armed Forces.

With General Votel, we discussed with the Prime Minister and earlier today with the Army Commander, three new U.S.  Department of Defense programs that we are announcing today.

These systems — valued at more than $120 million — include six new MD 530G light attack helicopters, six new Scan Eagle unmanned aerial vehicles, and leading edge communication and night vision devices.  This advanced equipment will help the Army build on its steady strong capability to conduct border security and counterterrorism operations and importantly to defend the country and the people of Lebanon.

Again I’m very delighted to welcome General Votel back to Lebanon, another great example for our support for Lebanon and for the Lebanese Armed Forces.”

General Votel: “Thank you ambassador and let me say how pleased I am to be back in Beirut and have an opportunity to meet with the Prime Minister this morning and with the armory commander as well.  I would echo what the ambassador said, we had an excellent discussion this morning and I think that we began to continue to take some steps to move forward in strengthening our relationship.

In closing I would just say how proud we are to be partners with the Lebanese Armed Forces.  They are professional, proficient, and focused on the Lebanese people and I speak from the helm of US Central Command we are extremely proud of their performance and very glad to be associated with them.

Thank you very much.”