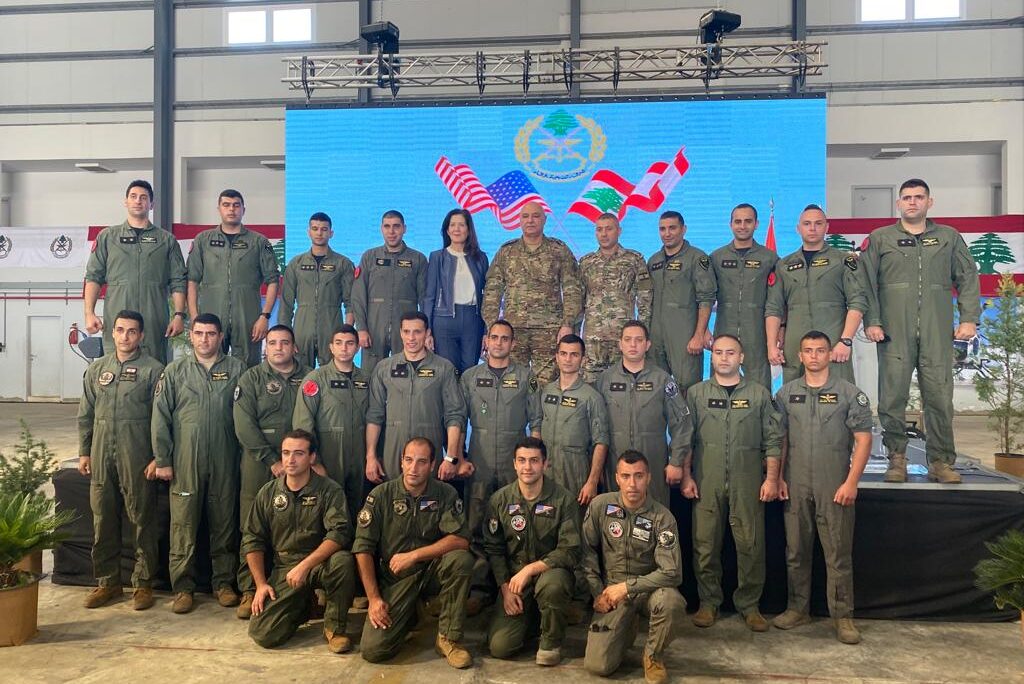 “Sabah el-Kheir, Good morning, General Joseph Aoun, General Haikal, distinguished guests. What an honor it is to be with you this morning.  As you probably know, General Aoun and I recently traveled to the United States where we were hosted for a series of meetings about U.S. – Lebanese military cooperation and coordination, and I am proud to have the opportunity to demonstrate how real that commitment is with yet another major equipment delivery.  Look at this beautiful specimen.

So today, we welcome the provision of six MD-530F+ Light Attack Helicopters to the Lebanese Armed Forces (LAF) Air Force.  I loved this video we just watched and I just want to seize on the theme of teamwork that you identified, the same teamwork that we see between these MD 530(s), we see between the LAF and the United States military.

Since 2017, the U.S. military teams have worked closely with the LAF to ensure the capabilities of these aircrafts would fill mission requirements and enhance the operational capacity of the LAF in providing for Lebanon’s security.  Today, we are not only formally inaugurating these helicopters, valued at over $40 million dollars, but we are welcoming them as the newest additions of the LAF’s air fleet.

This helicopter is the first light attack helicopter of its kind to integrate APKWS missiles and live downlink of targeting data.  Most importantly, this technology showcases the LAF’s increasing levels of combat capabilities.

We are also recognizing the LAF pilots and technicians who completed training on these aircraft in preparation for their deployment in the field.  These officers join a cadre of top performing LAF personnel, who have benefitted from U.S.-sponsored training and education, and this is such an important part of our bilateral cooperation.  Bravo for the performance that we got to witness out there just a few minutes ago.

Today, both the helicopter delivery and training graduation, represent the enduring partnership between Lebanon and the United States. The United States recently announced an additional $67 million in annual Foreign Military Financing support for this year 2021.  This is in addition to the $120 million that we had already set aside for Lebanon bringing the total to $187 million for this year.  We remain committed to pursuing additional ways that we can help the LAF, and I include in that the LAF soldiers.  We know your country is going through difficult times, your people are experiencing very difficult economic circumstances and many of you yourselves are.  We are working aggressively to help find solutions to those problems, and I would include in that also our friends and colleagues in the Internal Security Forces.  We recognize the vital role that you play in securing and protecting Lebanon.

Thank you all for allowing me to participate in today’s event.  It gives me such pride and really to recognize the technological and operational advancements that the LAF is making even despite the ongoing economic hardships.  We commend your dedication and your hard work and I look forward to a continuous and ever increasing partnership between our two countries because you know it, we are in this together.  Thank you.”