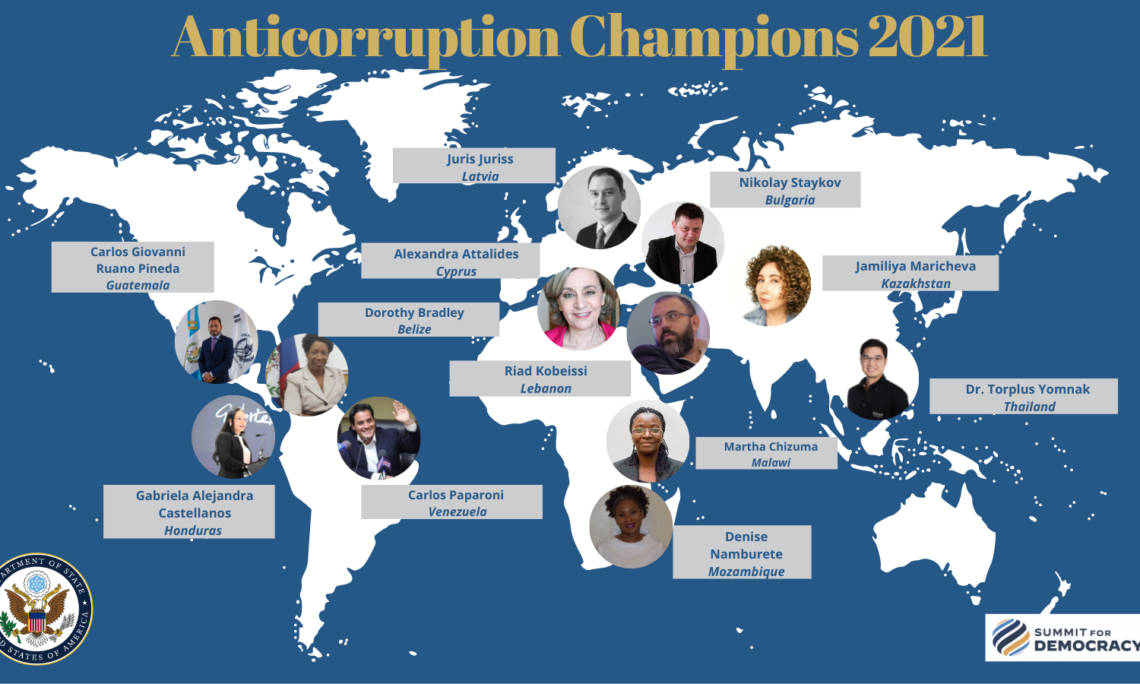 As the Biden-Harris Administration launches the first Summit for Democracy, it is crystal clear that corruption is one of the most urgent challenges that countries face and must address.  Sadly, no country, region, or community is immune to corruption’s harmful effects on democratic institutions, economic development, investment, and security.  In developing countries, funds lost to corruption are estimated at 10 times the amount of official development assistance.  This is a monumental loss to those working to build their communities and improve the lives of their fellow citizens.  That is why we cannot afford to indulge or ignore corruption, least of all from our global leaders.  The Biden-Harris Administration has pledged to lead international efforts to bring transparency to the global financial system, promote integrity, and combat practices that undermine democracy.

At the State Department, the Bureau of International Narcotics and Law Enforcement Affairs (INL) works in more than 90 countries to support and train criminal justice sector officials, provide resources and equipment, and bolster civil society and independent media in the fight against corruption.  This past year, we publicly designated and denied visas to over 60 corrupt foreign officials and immediate family members and supported the Department of the Treasury in sanctioning 79 individuals and entities in connection with corruption under the Global Magnitsky program.  Our commitment in this fight recognizes that no government or society can function effectively where corruption is endemic.

We also want to recognize and celebrate allies around the world who undertake the often-dangerous fight against corruption in their communities.  Today, Secretary of State Antony J. Blinken announced the second cohort of international Anticorruption Champions, recognizing 12 individuals who have demonstrated leadership, courage, and impact in preventing, exposing, and combating corruption.  The following brave men and women have faced threats and overcome staggering challenges as they fight for accountability, transparency, and the rule of law:

Dorothy Bradley, Auditor General of Belize, exposed corrupt practices and illegalities in the sale of Belizean passports and visas, and in a scheme to illegitimately bestow Belizean citizenship to foreign nationals.  Her report uncovered and substantiated a long-suspected chronic dereliction of duties, abuse of power, malfeasance, corruption, and illegalities within the Belizean Immigration, Nationality, and Passport Department.  The ensuing coverage resulted in the dismissal of a cabinet minister, the removal of an elected city councilor, and several immigration officers facing both criminal and administrative charges.

Nikolay Staykov, investigative journalist and co-founder of the Anti-Corruption Fund (ACF), an independent watchdog NGO in Bulgaria, played a critical role in unveiling high-level public corruption in Bulgaria over the past few years.  The revelations made by Mr. Staykov and the ACF team led to a number of high-level political resignations, uncovered new leads in public corruption cases, and inspired widespread public demand for good governance and to uphold the rule of law.

Alexandra Attalides, political activist and newly elected Member of the House of Representatives of the Republic of Cyprus (ROC), created greater public awareness of abuse of power and inspired her fellow citizens to demand government action against corruption.  In October 2020, she organized and led the first significant anticorruption demonstrations ever to take place in the ROC, turning public anger into action and resulting in the termination of the country’s citizenship-by-investment (CBI) program and the resignation of multiple lawmakers implicated in CBI corruption.  Several criminal investigations associated with the CBI program are now underway.

Carlos Giovanni Ruano Pineda, President of the Guatemalan Association of Judges for Integrity (la Asociación Guatemalteca de Jueces por la Integridad) (AGJI), has served in the Guatemalan justice sector for more than 13 years.  As various actors in the Guatemalan government have undermined the rule of law in recent months, AGJI—under Ruano’s leadership—has been a vocal defender of judicial independence and democratic norms.  AGJI’s training programs, reports, social media advocacy, and annual conference are vital to addressing corruption in the justice sector in Guatemala and the region.

Gabriela Alejandra Castellanos, Executive Director of the National Anticorruption Council (CNA), is known as “The Honduran without Fear.”  Ms. Castellanos and the team she leads are on the front lines of the fight against corruption and impunity in Honduras, investigating the toughest cases in the country and shining a light on corrupt acts that would otherwise go unpunished.  Beyond highly visible investigations, she and CNA educate the community, inspire hope across the region, and exemplify what Honduras needs to counter corruption and impunity.

Jamiliya Maricheva, founder of the ProTenge.KZ project, has made innovative use of social media to “break the cultural code” of accepting and expecting corruption in Kazakhstan’s government procurement system.  Since 2019, she and her team have informed, educated, and mobilized Kazakhstani citizens against the misappropriation of government funds, using Kazakhstan’s open government data to highlight and avert misuse of taxpayers’ money.  The project also explores how other countries examine, regulate, and hold government officials accountable.

Juris Juriss, Head Prosecutor of the Anti-Money Laundering Division for the Latvian Prosecutor General’s Office, led the successful prosecution of oligarch and Global Magnitsky designee Aivars Lembergs for bribery, money laundering, and corruption-related offenses.  Mr. Juriss was involved in the Lembergs case from the beginning and endured years of threats and surveillance by Lembergs and his supporters, all while refusing to yield to the mounting pressure.  He now volunteers his time to train the next generation of Latvian prosecutors and police.

Riad Kobeissi, head of the investigative reporting unit of independent and privately-owned Lebanese media outlet Al Jadeed TV, has demonstrated integrity and courage in confronting gross corruption in the public sector.  At least seven years prior to the horrific August 4, 2020, Beirut port explosion—an event that has epitomized the endemic corruption in Lebanon — he began exposing rampant bribery and smuggling at the port through his uniquely bold blend of investigative and “accountability journalism.”  His pioneering work has inspired young people in Lebanon and throughout the Middle East.

Martha Chizuma, Director-General of the Anti-Corruption Bureau of Malawi, has persistently demonstrated leadership, courage, and impact in preventing, exposing, and combating corruption.  At the time of her appointment to her prior role as Malawi’s Ombudsman, Ms. Chizuma was the youngest person and only the second woman to hold the position in Malawi.  In 2015 and 2020, she was elected African Regional Director of the International Ombudsman Institute.  She has faced threats, harassment, and smear campaigns in her pursuit of justice for Malawians, yet she courageously continues her work unabated.

Denise Namburete, Executive Director of N’weti Health Communication, a Mozambican NGO, displayed exceptional courage in holding her government accountable for its role in the “hidden debts” scandal, in which former government officials embezzled nearly $2 billion.  Amid threats of violence and intimidation, she persevered to garner public support that resulted in Mozambique’s constitutional courts taking on the case.  She also promoted a Sovereign Wealth Fund to ensure Mozambique’s future natural gas-fueled windfall is managed in a transparent way that benefits all Mozambicans.

Dr. Torplus Yomnak, Founder and Chief Advisor of HAND Social Enterprise and an Assistant Professor at Chulalongkorn University, has developed and supported a broad range of anticorruption projects in Thailand and across the Mekong region.  Dr. Torplus is an innovator and influencer who leverages the latest technologies and coordinates between NGOs, government, and the private sector to battle corruption.  Dr. Torplus has consistently advanced anticorruption awareness, procurement reform, public-private cooperation, government data transparency, and youth engagement.

Carlos Paparoni, Venezuelan Interim Government Presidential Commissioner Against Corruption and Terrorism, produced financial intelligence and analysis of the regime’s corrupt and criminal activities that have been key to international efforts to constrict the illicit financial flows that fund the regime’s authoritarian grip.  His budget analysis work uncovered that 98 percent of the Venezuelan regime’s allocated budget for food subsidies was never spent and appears to have been stolen – directly contributing to food insecurity and malnutrition in Venezuela.

As these remarkable individuals show, only by working together can we stop corrupt actors from operating with impunity.  The State Department reaffirms our commitment to all those working to build transparency and accountability around the world.

About the Author: Todd D. Robinson is the Assistant Secretary for the Bureau of International Narcotics and Law Enforcement Affairs. Previously, he served as Chargé d’Affaires in Caracas, Venezuela and U.S. Ambassador to the Republic of Guatemala.