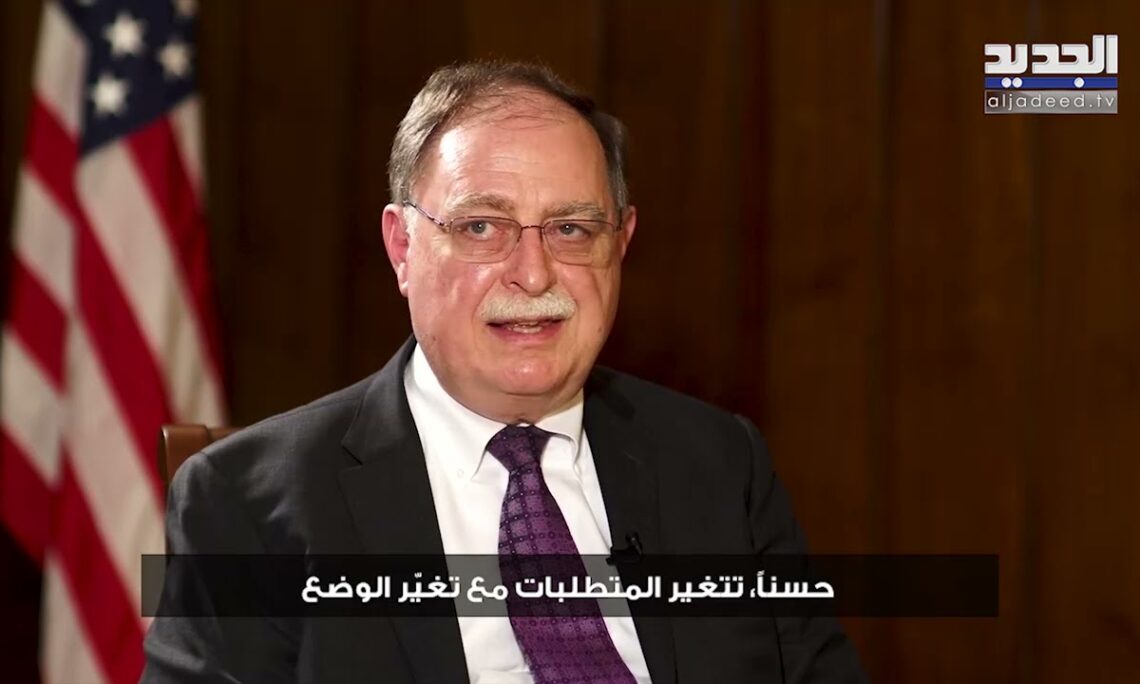 Al-Jadeed: You are most welcomed in our program at al-Jadeed TV.

Betts: It’s a pleasure to be here.

Al-Jadeed: Thank you. You are the Principal Deputy Assistant Secretary of State for Political-Military affairs. So I will start asking you about your trip to Lebanon. Mainly, what is the purpose of your visit to Lebanon? With whom did you meet and what did you discuss?

Betts: Sure. Well, I’m at the end of a series of high level American officials that have come to visit Lebanon in recent weeks. My job is focused on security assistance and working with our partner countries’ militaries. We’ve had other visitors come that have focused on political and economic issues, energy issues. But the focus of my visit is working with the Lebanese Armed Forces and how we can best support them in the current situation, which has affected them just as it has affected all Lebanese.

Betts: I did. He was very generous with his time and with the time of his staff. So we were able to have a thorough discussion of…

Al-Jadeed: What did you discuss with him?

Al-Jadeed: So how is the United States assisting the LAF this year?

Al-Jadeed: Yes. I want to ask you about the meeting with General Joseph Aoun.  Did he ask about main needs, special requests, let’s say?

Betts: Well, we didn’t talk about very specific things. What we–and I don’t want to get into the details of our diplomatic discussions–but in general, we talked about what the current state of the Lebanese Armed Forces was and how the international donor community and particularly the United States, could best help meet their current requirements.

Al-Jadeed: Is it available to achieve these needs?

Betts: Well, the Lebanese Armed Forces, like most of Lebanon, is suffering from the current economic crisis. And so we talked about what the most urgent requirements were and…

Al-Jadeed: They are, what are the urgent requirements?

Betts: Well, the urgent requirements are the same things that you would expect–how to keep the Force functioning and sustained while the country gets through this difficult period.

Al-Jadeed: The State Department’s Undersecretary for Political Affairs, Victoria Nuland, visited Lebanon on October 14th and at her press conference announced $67 million in new funding for the LAF. What is this $67 in Foreign Military Financing?

Betts: That sixty seven million dollars in foreign military financing is part of the $187 million that we’re able to provide this year. It goes for equipment, training and sustainment. It hasn’t been finally decided how that money will be spent yet, but that was, that is, part of the purpose of my visit to find out what the current requirements are so that when we are providing assistance, we are meeting the current needs of the Lebanese of the LAF.

Al-Jadeed: Yes. And do you know exactly what are the current needs? Right now.

Betts: Well, the requirements change as the situation changes. And so as we’re preparing how best to assist, it’s important that we find out what today’s requirements are rather than what last month’s or last year’s requirements were. OK?

Al-Jadeed: How has the assistance changed from President Trump to President Biden?

Betts: It might be a surprise to some people, but the assistance has been fairly consistent over the last five years. We’ve provided about $100 million in Foreign Military Financing each year. That’s a period that bridges both American administrations. There is widespread recognition that the Lebanese Armed Forces is the only legitimate security force in the country that is protecting its security, stability and its sovereignty. And so there is widespread support for continued assistance to the LAF. And so it has been fairly consistent. The amount has gone up this year because we recognize the economic crisis has resulted in unusual requirements.

Al-Jadeed: Yes. And is assistance to the LAF an important a locus of effort for the current administration?

Betts: Absolutely, it is. I mean, I think you see that in Under Secretary Nuland’s announcement of the extra $67 million. That was a recognition that the Lebanese Armed Forces could use additional assistance, and it was a demonstration of America’s support for the institution.

Al-Jadeed: The U.S. Administration condemns the corruption here in Lebanon. Is the military assistance monitored?

Al-Jadeed: Do you suspect any corruption?

Al-Jadeed: Do you expect that this funding will continue?

Betts: Our fiscal year ended at the end of September. We just started a new fiscal year and our Congress has yet to give us a budget. So I can’t really get ahead of our legislative branch that provides our budget every year to say what level of support might be available for the Lebanese Armed Forces or for Lebanon. But as I said earlier, there is widespread support for continuing assistance.

Al-Jadeed: Mr Betts, what is the Presidential Drawdown Authority?

Al-Jadeed: What does that provide here in Lebanon?

Betts: It gives the President the authority to draw on stocks in the United States that belong to the U.S. government and provide them to foreign partners that are in emergency situations as defined in our legislation. And so that, that is the authority the President used, given the current state of the economy here.

Al-Jadeed: Is there anything related to reforms?

Betts: The Presidential Drawdown Authority legislation is to respond to emergency situations and the judgment of the President was that the situation in Lebanon right now justified the use of this Authority to provide urgently needed material that the the Lebanese Armed Forces could use in responding to the current crisis.

Al-Jadeed: What are the real U.S. Interests in supporting the LAF?

Betts: Our real interest is in supporting an institution that is widely supported by the public that is responsible for its security, stability and protecting the sovereignty of Lebanon. Regional stability is something that we strive for, and we believe that supporting a legitimate institution that serves all the people of Lebanon is an important role that we can play.

Al-Jadeed: Is this intended to oppose certain political parties in Lebanon?

Betts: Our assistance to the Lebanese Armed Forces is not a political tool in any sense. It is designed to support the legitimate security force of the country.

Al-Jadeed: Let me ask you about the US House of Representatives Foreign Affairs Committee that passed a draft resolution that emphasized U.S. support for an independent and impartial Lebanese army, saying the House of Representatives considers the Lebanese Armed Forces the sole institution entrusted with defense of the sovereignty of Lebanon and supports the United States partnerships with the LAF to counter terrorist groups such as Hezbollah, ISIS and Al Qaida in Lebanon. So does this mean that you are funding the LAF to confront Hezbollah?

Al-Jadeed: So the United States reportedly provided a cash injection for a commander that went to an account that some call a slush fund.

Betts: There is no slush fund. There is an account managed by the Department of Defense that defers the cost of border security and it is an account that requires documentation for the expenses it’s covering. And this, I think, is the money that that some people are calling a slush fund. It is not a slush fund,

Al-Jadeed: But some say that it is beyond the reach of the Lebanese government’s ability to audit.

Betts: Well, I don’t know what the limits of the Lebanese government auditing authorities are, but for this account and these funds, there’s documentation required for each and every expenditure.

Betts: I’m a little confused by that, because our assistance goes to partners who we believe are contributing to stability and security for their country and their citizens, as well as for the regions that they’re located in. We have never had any question that the Lebanese Armed Forces were not a force that served all the people of Lebanon, and they’re providing security and stability for the country. And so I don’t see how that can be more or less valuable than providing it to other military partners where their militaries are doing similar jobs for their country and their citizens.

Al-Jadeed: Mr. Betts, this is your first visit to Lebanon. Is there anything you’d like to add?

Betts: Lebanon’s a beautiful country. I regret that I hadn’t been here earlier. I recognize that the country is going through a difficult time right now with the economic crisis, a crisis that only terrorists, thieves and criminals can profit from. And we’re looking to see what we can do to help the country through this period…

Al-Jadeed: militarily and economically or what?

Al-Jadeed: Thank you very much, Mr. Timothy Alan Betts for this interview. Thank you.