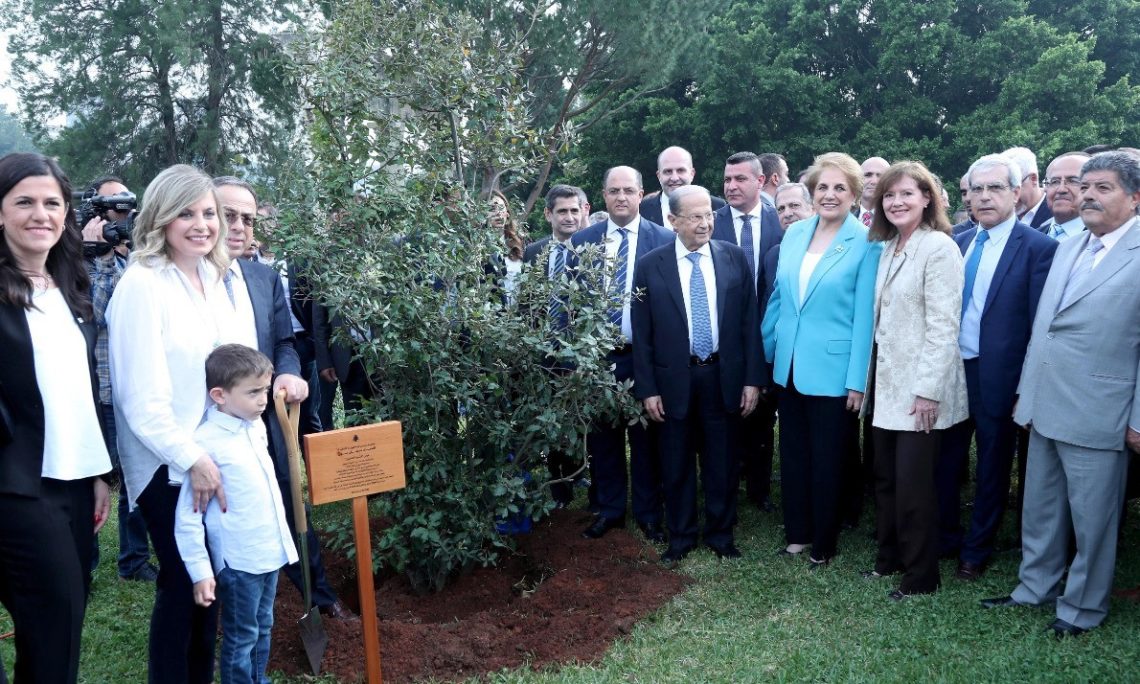 In her remarks, Ambassador Richard emphasized the U.S. government’s long-standing commitment to environmental conservation in Lebanon. “Today, we are proud to celebrate the planting of One Million trees in Lebanon.  We will continue to support the planting of tens of thousands more over the coming two years while continuing to improve natural resource management in three focus areas: the Shouf, the North and Rashaya.”

Beneficiaries shared their experience working with USAID’s reforestation project and highlighted the impact it had on the economic, environmental, and personal levels. The “Millionth Tree” represents a major milestone towards the Ministry of Agriculture’s 40-million Tree Program.

Since 2010, the United States has supported Lebanon with nearly $25 million for forest restoration and environment improvement.  Through its new $5 million “Livelihoods in Forestry” project, USAID will continue to support reforestation and environmental management in Lebanon.

Below are Ambassador Richard’s remarks at the event.

I am so pleased to join you today to plant this tree – the one millionth – which signifies the United States’ shared commitment with the Lebanese people to preserving this country’s heritage.  Today’s milestone reflects just one aspect of the United States’ ongoing partnership with Lebanon.   I am very proud of this.  In addition to what we do to support the Army, the agricultural sector, and education, the United States is the largest contributor to Lebanon’s reforestation effort.

Unfortunately, since Independence, Lebanon has lost over 20 percent of its forest cover due to wildfire, urbanization, and poor regulation of quarries and landfills.  The fact is that forest degradation affects not only the health and beauty of our physical surroundings.  It directly affects livelihoods.  Agricultural output falls because aquifers cannot recharge and top soil erodes.  Air and water quality degrades as the number of trees declines.  All of these factors impact everyone’s quality of life.

In 2004, the United States joined with Lebanon to begin to address these challenges by enlisting the U.S. Forest Service in a Lebanon-wide campaign to combat wildfires. In 2010, we launched the $19.6 million dollar Lebanon Reforestation Initiative (LRI).  Together, these programs have helped Lebanon meet its objectives under the Ministry of Agriculture’s “40 Million Tree Program.”

Managing and sustaining the environment is not just about saving trees.  Our commitment to Lebanon’s environmental restoration efforts also involves helping communities across Lebanon who depend on the forests for their livelihoods.  Together with 68 local municipality and community partners and scores of private sector partners, local NGOs, and environmental activists, our work has generated income for over 1,700 seasonal workers.  It has alsoresulted in the adoption and promotion of new forestation techniques that are now a model for private and public sector organizations.  The launch of Lebanon’s first national forestry park in Anjar is a great example of what we can achieve when we work together.

Funding alone is not going to change Lebanon’s environment—only people can do that.  Only the commitment of municipalities, citizens, and environmental groups can make the needed changes.  And we must all continue to be strong advocates for Lebanon’s environment both at the local and national levels.

I would really like to salute the dedication of all the volunteers for their work to revive Lebanon’s natural beauty, especially restoration of the country’s cedar forests.  I applaud the efforts of LRI’s ongoing work with our newest project, a $5 million dollar “Livelihoods in Forestry” project that will complement the forestry management projects of some of the other donors.   We will continue to support the planting of tens of thousands more trees and improve natural resource management in the Shouf, the North, and Rashaya.

Partnership and community empowerment can preserve Lebanon’s forests and draw increasing numbers of tourists to witness Lebanon’s natural beauty for themselves.  We are so very happy and proud to be part of that effort. Thank you very much.