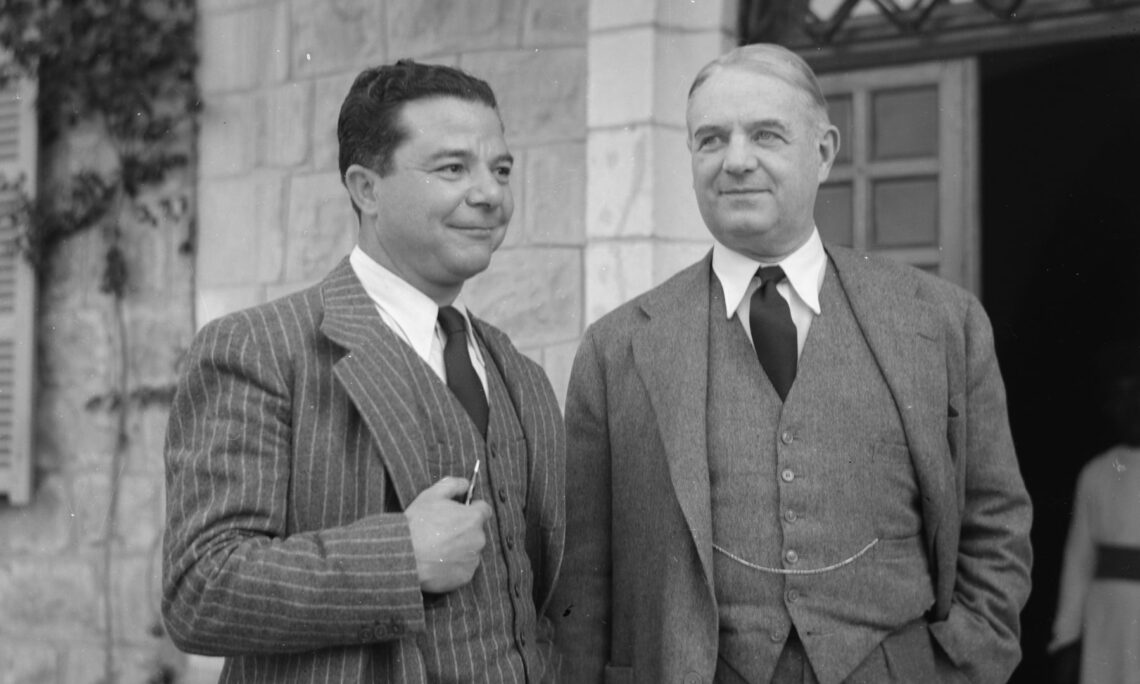 This blog post was written by Consul General Mark Marrano

When I found out I was assigned to Embassy Beirut, my passion for history and research about U.S.-Lebanese relations led me to Consul General George Wadsworth II, the first highest-ranking U.S. diplomatic representative to Lebanon in 1942.  I was fascinated to discover an overlapping personal history between Wadsworth and me.  For example, both my father and Wadsworth were natives of Buffalo, New York; served 42 years as diplomats; raised a family overseas; and passed away in Bethesda, Maryland.  With relatives still living just outside Buffalo, I consider that my hometown (Go Bills!) and have a house in Bethesda.  Wadsworth served in Iran, as did my father, and in Iraq and Egypt, my posts prior to Beirut.  Wadsworth had children who were born overseas, as did my father and I.

Discovering these links to Wadsworth created a personal interest and fueled my research.  For example, when Wadsworth was first appointed to Lebanon, he rented and later purchased the two Bassoul Houses on Clemenceau Street near the American University of Beirut hospital.  These houses became the location of the new American Legation, the forerunner to the American Consulate and Embassy.

The early diplomats like Wadsworth and my father paved the way for later generations of diplomats like myself.  Remembering their past service gives us a greater appreciation of the present and inspires us to do better for the future.

Even though the roles have changed somewhat over time, I am honored and humbled to serve as the U.S. Consul General here in Beirut.

Eighty years ago today, on November 19, 1942, Consul General George Wadsworth II presented his credentials as U.S. Consul General in Lebanon.  Although “Ambassador” was not his official title, in many ways, Wadsworth did serve as such, being the highest-ranking U.S. diplomatic representative in Lebanon during a pivotal time of the country’s modern history.  In 1944, he was upgraded to the rank of Minister, following the official recognition of the Republic of Lebanon.  He was responsible for two legations for Syria and Lebanon but was based in Beirut.  The legation was given embassy status in 1952, and Minister Harold Minor became the first U.S. Ambassador to Lebanon.  As for Wadsworth, he continued his career and became Ambassador to Iraq, Turkey, Saudi Arabia, and Yemen, to name a few.   Wadsworth had an impeccable reputation both in the United States and in the Near East where he served the longest.  In a letter dated January 1958, King Saud told President Eisenhower that Wadsworth was “a man worthy of your confidence.”  The Buffalo Evening News wrote that same year: “This scholarly bent was an important facet of George Wadsworth’s character and over the 44 years he spent in and out of the Near East had caused him to accumulate factual knowledge and understanding of the area and its peoples beyond that of any living American […]”

When Wadsworth arrived to Beirut in 1942, paper-of-record An-Nahar newspaper wrote:  “The new diplomatic representative has been known by Beirut before and in other countries in the Middle East.  He first visited Beirut after his graduation from the United College in the United States.  At that time, he came to Beirut to teach at the American University [of Beirut].  Then he left teaching to [work at] the General Consulate Office which at the time took care of issues related to France and Great Britain and other Allies countries.  Most of his work was in countries close to Syria and Lebanon […]  As soon as he arrived, he visited General Catroux […]”

From his writings, Wadsworth was also an advocate for Lebanon’s independence, an occasion we will be marking together with our Lebanese friends and partners in just a few days on November 22.  Telegrams signed by Wadsworth, which are available via the State Department Office of the Historian, note this fascinating period of Lebanon’s history.  In a telegram dated November 22, 1943, Wadsworth wrote to the Secretary of State: “Ensuing discussion led to decision that official restoration will take place Wednesday morning; tomorrow Ministers will arrange unofficially for its celebration by all the nation.  Meanwhile general strike will continue, to be ended Wednesday by Presidential manifesto calling for resumption of normal life […] All this was told me by special messenger sent by President with assurance of his and Government’s highest appreciation of American support and aid.  He returned with my warmest personal congratulations to President and Government.  I added I felt certain I spoke as well for my Government.  I asked if I might call in person; half hour later appointment for tomorrow morning was made.”

Through this tribute to Wadsworth, we honor another milestone of the longstanding diplomatic relationship between the United States and Lebanon.  We are in this for the long haul.  As Ambassador Shea stated previously: “Let us resolve to help the people of Lebanon emerge from the compound crises the country is facing and reclaim its position as a beacon of entrepreneurship and prosperity, as well as democracy and freedom in the Middle East.”