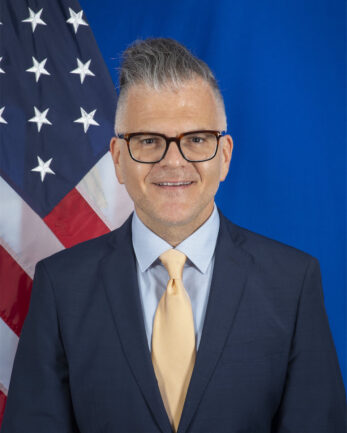 Richard Michaels, a career member of the Senior Foreign Service, arrived in Beirut in May 2021 after serving as Economic Counselor for Mission Nigeria in Abuja. He was previously Deputy Chief of Mission in Kigali, Rwanda. His prior postings include: State Department fellow for U.S. Senator Tammy Baldwin; Political/Economic Counselor in Tunis, Tunisia; Special Assistant in the State Department’s Bureau of Near Eastern Affairs; Political/Economic Chief in Monterrey, Mexico; Economic Officer in Baghdad, Iraq; Staff Assistant in the State Department’s Bureau of Economic and Business Affairs; Cultural Attaché in Beirut; and Political/Consular Officer in Kuwait.

Before joining the Foreign Service, Richard worked in international business units at Delta Air Lines in Atlanta and Dubai. He holds a bachelor’s degree from Georgetown University’s School of Foreign Service and a master’s degree from Stanford University. Richard’s languages are Spanish, Arabic, French and Portuguese. He is a native of Wisconsin.