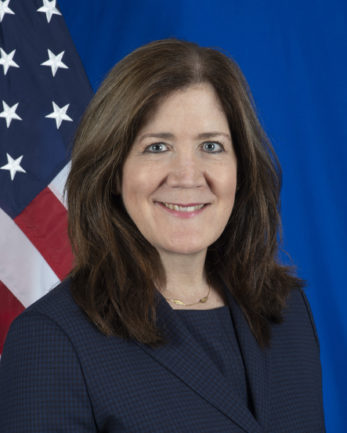 Dorothy C. Shea, a career member of the Senior Foreign Service with 28 years of experience, was appointed by President Trump as Ambassador to the Lebanese Republic on February 14, 2020.  Previously she served as Deputy Chief of Mission at the U.S. Embassy in Cairo, Egypt; from 2014-2017 as Deputy Principal Officer at the then-U.S. Consulate General in Jerusalem; and before that from 2011-2014 as Director for Asia and Near East in the State Department’s Bureau of Population, Refugees, and Migration.  She also studied at the National War College (NWC), where she earned a master’s degree in National Security Strategy.

From 2009-2010, she served as Senior Professional Staff Member with the Senate Foreign Relations Committee, where she covered Middle East and North African issues. From 2006-2009, she served as Counselor for Political and Economic Affairs at the U.S. Embassy in Tunisia. Other overseas assignments include service as political officer at the U.S. Embassy in Tel Aviv, Israel, where she worked on the Israeli-Palestinian peace process; and her first overseas posting was in Johannesburg, South Africa, during that country’s transition from apartheid to democracy.

Ms. Shea also served in a variety of positions in the State Department, including as Nigeria Desk Officer, Watch Officer, Staff Assistant with Policy Planning Staff, and Special Assistant in the Office of War Crimes Issues. From 2000-2001, she served with the National Security Council as the Director for Human Rights. In 1998 she was awarded a Council on Foreign Relations Fellowship, during which she lectured at the University of Witwatersrand in Johannesburg, South Africa, and wrote a book about the South African Truth and Reconciliation Commission.  Ms. Shea has received several Superior Honor and Meritorious Honor Awards in the course of her career.  She holds degrees from the University of Virginia and Georgetown University, in addition to NWC.  She speaks French and Arabic.

The Embassy is located in Awkar, off the Dbayeh Highway, facing the Awkar Municipal Building.