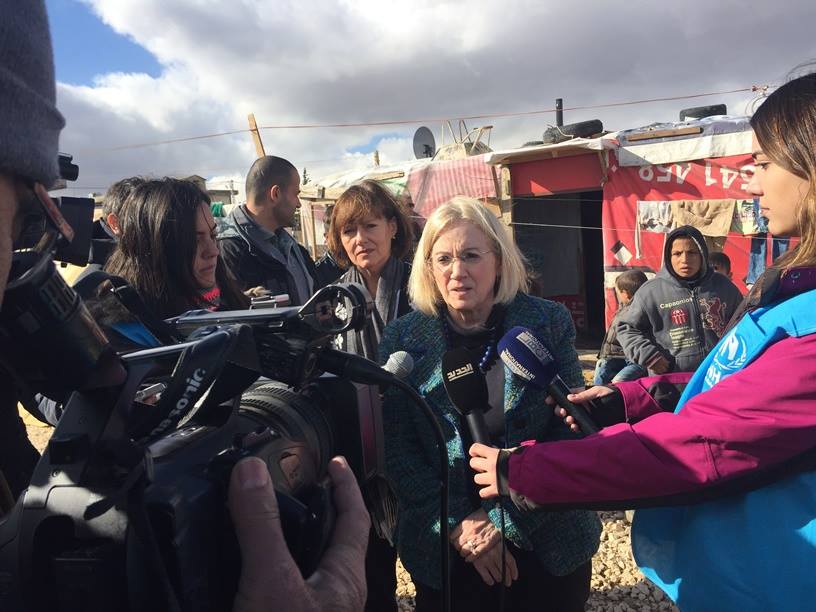 U.S. Assistant Secretary of State for Near Eastern Affairs Anne W. Patterson traveled to the Bekaa Valley today. She visited a UNHCR Informal Tented Settlement on the outskirts of Zahle, highlighting U.S. humanitarian assistance to Lebanon and Syrian refugees.

While there, she met with Syrian refugees, toured U.S. assistance projects, and received a briefing about the humanitarian situation from UNHCR officials. Throughout her visit, she reaffirmed the unwavering U.S. support to Lebanese communities that are struggling to cope with the effects of the Syrian crisis.

While at the Informal Tented Settlement, she delivered the following statement:

Good morning.  My name is Anne Patterson and I’m visiting from the U.S. with my colleague Ambassador Elizabeth Richard to show our support for the government of Lebanon and the Lebanese people, as they have very generously received over a million Syrian refugees into their country, and to also show support for the Syrian people, who are living in very dire conditions and who have been driven from their homeland.  The United States of America will continue its commitment to assist Lebanon and the Syrian refugee population.  We’re the largest donor to Lebanon and indeed to the Syrian refugees in other countries and we will continue our support.  I think at this time of year in particular in the United States and other countries, this touches our hearts to see these conditions and the way these children have been living.  But again, let me stress that we are very appreciative and recognize the generosity of the Lebanese people and these host communities.  The United States is also trying to do our best to help host communities.  We’ve assisted schools in Zahleh, we’ve assisted in water plants and pipelines in Zahleh , and we’ve sent children in Zahleh to schools and elsewhere in Lebanon.  So we realize the sacrifices that the Lebanese people have made and we are trying to do our best to address those.

I want to thank UNHCR and the international community and the very dedicated aid workers and NGO workers who are on the scene here.   I’ve seen this in many other parts of the world and they make huge personal sacrifices to help out refugees and displaced persons all over the world.  So I want to recognize their contributions as well. Thank you.