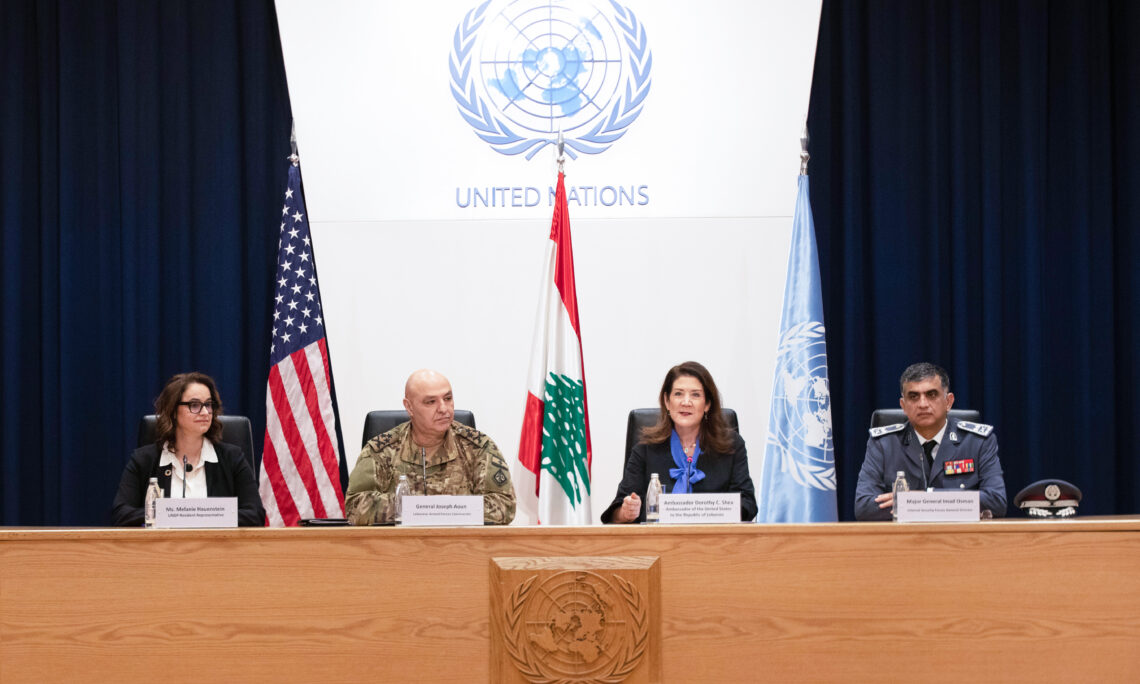 First, let me congratulate everyone involved in the successful signing, coordination, and soon implementation of the LAF-ISF Livelihood Support Program.  And I’d like to offer special thanks to UNDP for your coordination and partnership, and as our host today.

I would also like to thank my colleagues on stage:  Representative Hauenstein, LAF Commander General Aoun, and ISF Commander Major General Osman.  Your diligent efforts over many months, in addition to those of your teams, have contributed greatly to the joint goal of helping the LAF and ISF protect and defend the people and the sovereignty of Lebanon.

General Aoun, this project – to provide critical payments to Lebanon’s security forces – began with your words at the June 2021 International Conference on Supporting the LAF.  Your comments, as well as those of General Osman, about the fundamental economic difficulties faced by the men and women charged with Lebanon’s security helped us all to understand the gravity of the situation they face.  Those words spurred us into action.

In light of the urgency of Lebanon’s dire economic situation, we asked for and received the consent of the U.S. Congress to re-purpose a significant portion of our security assistance to support hardworking men and women of the LAF and ISF who faithfully report to duty to protect their homeland, with critical funds to put food on the table for themselves and their families.  The payments we are announcing today will provide soldiers and servicemembers who are eligible to receive assistance under U.S. law with $100 per month for six months, for a total of $72 million.  Providing this temporary assistance – which is the first time the United States has ever provided such financial support to security forces in Lebanon – will bring relief to brave and hardworking soldiers and servicemembers, as we urge Lebanon’s political leaders to elect a president, form a government, and enact urgent economic reforms.

Today’s announcement is yet another step toward deepening the strong relationship between the United States and Lebanon’s premier security institutions.  Since 2006, the United States has invested more than $3 billion in Lebanon’s Army, Navy, and Air Force.  U.S. equipment and training helped prepare the LAF for their victory over ISIS and al-Qaeda, and today, this support helps to secure the border with Syria and keep soldiers safe.

The United States and the ISF recently celebrated the 15-year anniversary of our security partnership.  Since 2007, the United States has provided more than $210 million in law enforcement assistance for basic policing techniques, community policing, specialized investigation skills, tactical training, corrections reform, and communications infrastructure.  All these activities have encouraged the training and growth of the ISF as a police force for all of Lebanon.

Today’s announcement is evidence of the United States’ support for security and stability in Lebanon.  But it is ultimately for the government of Lebanon to pay a living wage to its own soldiers and service members.  The United States is doing its part to provide relief, but due to the temporary nature of this assistance, which will last for six months, it is incumbent on Lebanon’s leaders to use this time to bring to fruition the IMF program.  This will allow them to get their economy back on track, so the government can once again have the resources to directly and sustainably pay the salaries of Lebanon’s soldiers and servicemembers.

The strength and resilience of Lebanon’s armed forces and police help keep the inhabitants of this country safe; our support for their efforts are indicative of our commitment.  We are in this together.