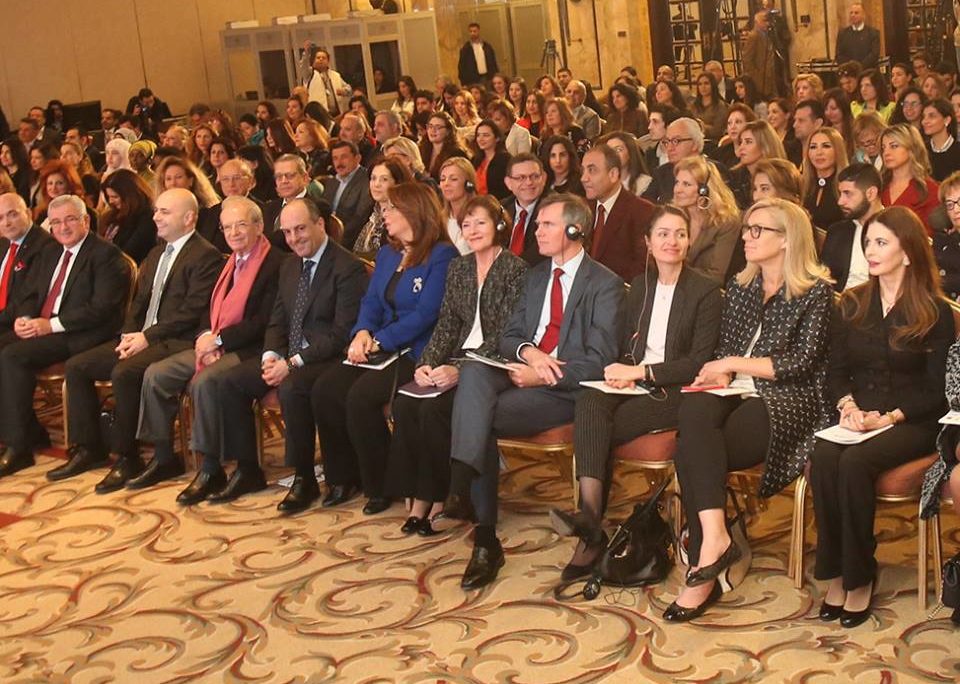 Good morning everyone.  I am very happy to be here today for the annual Women on the Front Lines conference, as we honor the achievements of women here in Lebanon, and discuss how we can promote progress on women’s issues.

I want to recognize and thank Rania Achkar, Anchor at MTV Alive and our MC today;   my friend and fellow speaker H.E. Leila Solh Hamadeh,   and especially our host Dr. May Chidiac, Founder and President of the May Chidiac Foundation – Media Institute.

This year’s conference theme:  “Be Bold for Change” is highlighted beautifully in the different panels today.    The theme could not be more relevant at this moment in time.

Lebanon finally has a President, after the position lay vacant for two and a half years.   It has a new government, and will soon have parliamentary elections.  Economic growth has slowed, even as a new generation of talented young Lebanese citizens enter the job market.  The Syrian refugee crisis continues to stress the country’s infrastructure, and try its patience and generosity.  At the same time, the situation in the region really could not be more complex.

I raise these challenges this morning, because I believe now, more than ever, Lebanon needs to have all of its citizens fully engaged  – women and men.

These issues are complex, and there is no simple fix for any of them.  Leading Lebanon through this period of adversity is going to require the talents and the creativity and the energy of 100% of this country’s very impressive human resources.  Not 50%.   But 100%.

This is possible.   As we approach the 106th International Day of the Woman, we can see how far women have come.  Women are very much on the front lines of achievement in Lebanon and across the globe.

We have no better example than this conference’s founder, Dr. May Chidiac, who would not, and will not, let her attackers silence her. She is the embodiment of real courage and of commitment to the ideals we should all aspire to.

And we have so many other examples here in Lebanon, not only famous and influential public figures, but countless others who make a difference at the local level.

At the U.S. Embassy this month, we are highlighting Lebanese “heroines” on our Embassy Facebook page. I invite you all to take a look.

The first three women we featured illustrate their diversity and accomplishments.

These three achievers are great reminders of the endless ways in which women contribute every day in every community in this country.

Susan B. Anthony, the great American advocate for women’s right to vote, recalled the preamble to the U.S. Constitution.   “It was we, the people.  Not we, the white male citizens, nor yet we, the male citizens; but we, the whole people, who formed this Union.

And we formed it, not to give the blessings or liberty, but to secure them;  not to the half of ourselves and the half of our posterity, but to the whole people—women as well as men.” She said that 146 years ago.   There are still too few women in government and business.   But the trajectory is good.

Women across the Middle East have made important strides in education and political participation in the past several decades.

According to UNESCO, the percentage of women with university-level education went from 0% in 1970 to 20% in 2009  —  almost on par with men.   In the political domain, the proportion of seats held by women in national parliaments went from an average of 4%  in 1997 to 17% in 2015, according to the World Bank.

In the U.S. too, we have seen progress.  In my own career path, the U.S. diplomatic service, women made up only 7% of the United States’ diplomatic corps in 1976.   Today, over 40% of Foreign Service Officers are women.   About a third of U.S. Ambassadors are women.  And of course over the past twenty years, we have had three women serve as Secretary of State.

Change comes from within. It can get an important push from the top down.  But real change comes from the bottom up, as many of you know very well.   So I call on everyone here to become an engine of change.   Let Lebanon set the example for the Middle East and become a land of opportunity and equality for all its citizens, and enjoy the prosperity, security, and humanity that comes with true equality.