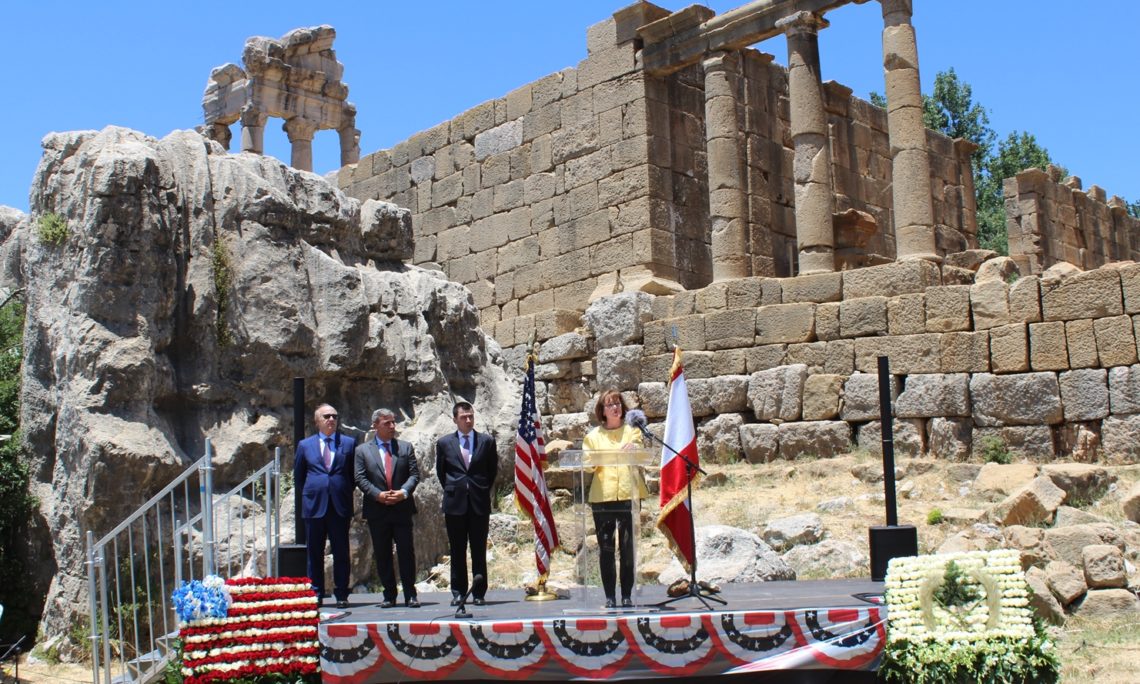 241st Anniversary of American Independence at the Faqra archaeological site in Kfardebian, June 30, 2017

On the occasion of the 241st anniversary of American independence, Ambassador Elizabeth H. Richard hosted a ceremony on June 30, 2017 at the Faqra archaeological site in Kfardebian. The event was attended by Lebanese officials, members of Parliament, and Embassy partners in a variety of fields including civil society, academia, development, the arts, business, and the media. Minister Cesar Abi Khalil, represented President General Michel Aoun, MP Ali Bazzi represented the President of the Chamber of Deputies Nabih Berri, and Minister Ghattas Khoury represented the President of the Council of Minsters Saad Hariri.

Below are Ambassador Richard’s remarks from the ceremony.

Thank you for joining us today as we celebrate our Independence Day.  I want to express my deep appreciation to the Ministry of Culture, the Directorate General of Antiquities, and the municipality of Kfardebian for allowing us to hold our celebration here in this stunning historic site.   I also want to thank our generous sponsors who helped make this event possible today.  You will all enjoy the many in-kind donations offered by our friends – you see their stands around the site.   And we are so grateful for the other contributions from our corporate donors who you see honored on the banner.   Please join me in a big round of applause for our generous guests.

Finally, I want to thank the musicians from Jazz Education Abroad who have been entertaining us today, including their Grammy-nominated conductor Dr. Gene Aitkin.

We are here to celebrate the 241st anniversary of the founding of the United States of America, when a group of visionaries took an incredible risk and signed the Declaration of Independence.

You may not know that Thomas Jefferson and John Adams — the only signers to later serve as Presidents of the United States — died on the same day:  July 4, 1826, which was the 50th anniversary of the Declaration of Independence.

That sounds more like the dramatic conclusion of an epic myth than the true piece of American history that it is.  But as we know, democracy is not some Hollywood movie where all the problems disappear when the curtains are down.  Democracy is a narrative that needs to be written every day, authored by a multitude of citizens from every segment of society.  It is hard, hard work, and it is never finished.

That work is challenging American society right now, with an ongoing, passionate debate about our priorities, especially about how we balance the security needs of today with our time-honored ideals of an open and diverse society.

Every democracy, including Lebanon, deals with these very difficult issues.  Some challenges come from outside, like the ongoing conflict Lebanon faces on its eastern border and  the tragic refugee crisis that has placed an impossible burden on your nation, especially the municipalities and villages that have so generously hosted those less fortunate.  And some are internal issues that the people and their leaders must resolve:   the strength of your economy, your faith in your institutions, and the role of civil society.  We all have much work to do

It is very special to be able to be with you at this magnificent archeological site.  It is one of the many historic sites and treasures that the U.S. Embassy has worked with your Ministry of Culture and the Directorate of Antiquities to restore.

And it speaks to our common roots.  Our language and our form of government were born in ancient Rome.   Your ancestors explored Roman lands and developed trading and cultural relationships.  We like to think the United States perfected globalization.  But we know your ancestors invented it.

As different and unique as both of our countries are, we share so many interests and values.  We all want a safe, secure, sustainable future for our children, blessed with freedom and opportunity, while nurturing a profound respect for diversity and an unshakable sense of community.

We believe in this relationship and are investing in our shared future.  Since early days of the founding of AUB, LAU and the American Community School by Americans some 150 years ago, to more recent American commitments – with nearly $4 billion invested in Lebanon in the last 10 years, in development, education and security.

At the groundbreaking ceremony for our new Embassy in April, I spoke about the significance of that event in the context of nearly 200 years of relations between the United States and Lebanon.  The new billion-dollar Embassy compound is a symbol of our long term commitment to this country.  It is also evidence of the confidence we have in the Lebanese people and their future.  We look forward to 200 more years of friendship and partnership between our two nations.