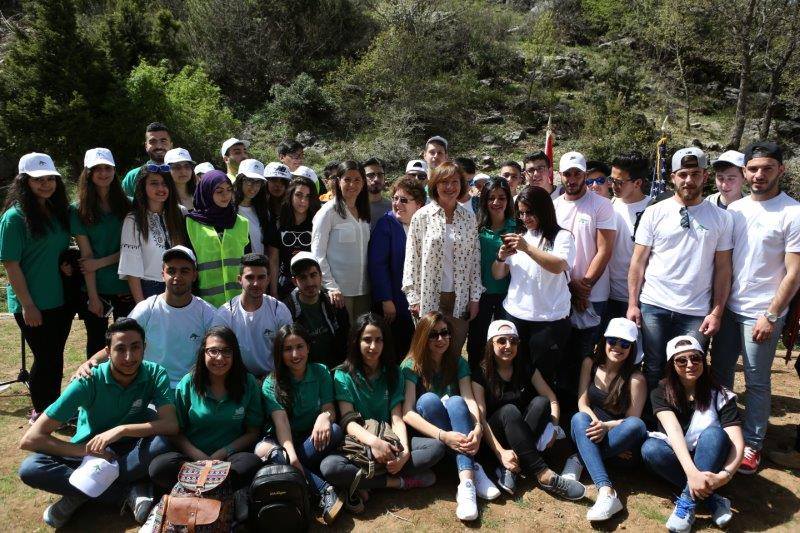 Ambassador Richard with the youth volunteers participating in the environmental day

On April 22nd, U.S. Ambassador to Lebanon Elizabeth Richard planted cedar trees with 120 youth volunteers from around Lebanon in Arz Ehmej, Byblos district to celebrate International Earth Day. More than 250 trees (40 % cedar trees) were planted throughout the day. This environmental day was organized by the USAID-funded Lebanon Reforestation Initiative (LRI) under the auspices of the Municipality of Ehmej and in partnership with the Corridor Planning Committees of the Rachaiya, North, and Shouf Social and environmental corridors.

Ambassador Richard was joined by Paul Moussa representing the Minister of Environment, Presidents, Vice Presidents and Council Members of more than 40 municipalities, local community members and other reforestation stakeholders.

In her remarks, Ambassador Richard emphasized the U.S. government’s long-standing commitment to environmental conservation in Lebanon. Mr. Moussa highlighted the importance of increasing the level of youth groups’ participation in environmental protection as they are the nation’s backbone. He also acknowledged the positive impact of work performed by LRI to build linkages between different communities in Lebanon to promote reforestation.

Since 2010, the United States Agency for International Development (USAID) through LRI invested $19 million to provide technical assistance and institutional support to communities, civil society, and the private sector on sustainable forestry practices and wildfire management in economically depressed and environmentally degraded regions of Lebanon. LRI has assisted diverse local communities to restore forest lands through planting more than 600,000 native trees on over 880 hectares, with an average survival rate of 75-80 percent. The project has created more than 1,200 jobs, mostly seasonal, including tree planters, forest guards, and consultants.