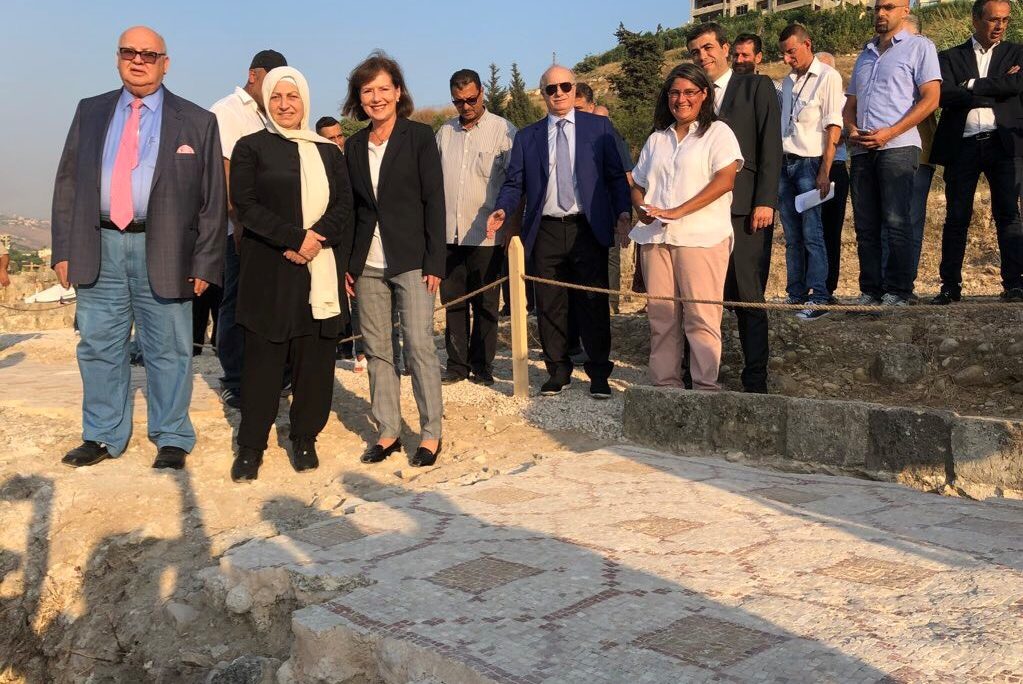 Ambassador Richard at Inauguration of AFCP Project at Eshmun Temple

Today, U.S. Ambassador Elizabeth Richard took part in the inauguration ceremony organized by the Ministry of Culture marking the completion of an Ambassadors Fund for Cultural Preservation project to rehabilitate the Eshmun Temple site.

In her remarks, Ambassador Richard highlighted the close collaboration between the U.S. and the Lebanese governments to preserve Lebanon’s cultural heritage.  This Ambassadors Fund for Cultural Preservation project funded the restoration of mosaics at the 7th-Century BC Eshmun Site.  The project also supported the development of explanatory materials to facilitate tours of the site.

Established by Congress in the fall of 2000, the U.S. Ambassadors Fund for Cultural Preservation awards grants for the preservation of cultural sites, objects and collections, and forms of traditional cultural expression, such as music, dance, and language in more than 130 countries around the world. To date, AFCP has funded 17 projects in Lebanon including the preservation of the Ras-Nahel Khalwet religious site in the Shouf Mountains, the Mubarakeh Tower in Tyre, Islamic manuscripts at the Lebanese National Library, the funerary complex at the Al Bass Necropolis site in Tyre, the Hermitage of Mar Bichay at the Mar Antonios Monastery in Ehden, a Roman-era temple in Temnin in the Bekaa Valley, and historic sites on the Rabbit and Palm Islands Nature Preserve off the coast of Mina, near Tripoli.

Below are Ambassador Richard’s remarks:

Good evening everyone.  I know it is warm, so thank you so much for sticking with us because this is a really important day for us at the U.S. Embassy and for all of you.  Especially Mr. Minister, I am are very happy to have you with us, Member of Parliament Madam Bahia Hariri, and of course the Director General whom we know so well and Anne Marie, the curator of the National Museum, is with us as well.  So thank you very much.

I am really happy to be here to celebrate the inauguration of the restoration of these mosaics.  These are each a unique piece in the history and rich heritage that Lebanon has.

I would like to also say a special thank you to all of those who got us to where we are, to the finish line of this project, which as you know took time and very, very careful attention.

You know, this week has been a really busy one for the U.S. Embassy here in Saida.  Just earlier this week, we were here with USAID visiting with farmers from this area to celebrate a very successful effort to improve the quality, quantity and value of agricultural products that are made here– in this case it is avocados.  Some of your farmers visited the University of California to learn from our experts their best practices, and some of those University of California folks came here to see things on site.  And I think the results are already being seen in the marketplace.

Earlier today, I took a few minutes to visit the Crusader castle that’s not very far away.  That landmark takes us back to a certain time in Lebanon’s history.  But the site we are working to preserve today goes so much further back in time.

I found the briefings in the visit today from your experts absolutely fascinating.  And I would really like to take a moment here to salute all those archaeologists, historians, and cultural preservation champions whose work, far from the front pages of the newspapers, is preserving this rich heritage for your children, your grandchildren and their descendants.

The project we are visiting today is one of seventeen that have been implemented throughout Lebanon with the support of the Ambassadors Fund for Cultural Preservation.

The Fund was established eighteen years ago by the U.S. Congress as a commitment from the American people to protect and rehabilitate cultural sites and objects, and to assist organizations and governments to preserve and share their cultural heritage with visitors from around the world.

This project is a particularly interesting example of the very close collaboration that we have between the U.S. Embassy, the Ministry of Culture and the Directorate General of Antiquities.

I hope you will all remember the case of the trafficked Bull’s Head sculpture, which was repatriated to Lebanon in February of this year through the combined efforts of the Ministry (of Culture), the Internal Security Forces, and U.S. law enforcement.

That piece, and several others that were returned with it, were originally housed here, at the Temple of Eshmun.  They were moved later to a storehouse in Byblos in the 1950s and 60s, and unfortunately later were looted and sold during the civil war.

We at the U.S. Embassy are very proud to have been part of bringing these important treasures of Lebanon’s heritage and history back to their home.

The mutual commitment of both our countries to securing Lebanon and its cultural property, and combatting illicit trafficking, contributed to that successful repatriation.

Our efforts continue today to locate and bring home to Lebanon all looted artifacts.  And we remain committed to preserving the vast heritage sites and objects found across this beautiful country.  I am really honored to be here today with you all at the inauguration of this site and I look forward to continuing to working in this field together with you in the future.

Thank you very much